With delegates, energy / environment  Ministers, business representatives and NGO leaders arriving in Durban for COP 17, attention again turns to the pressing issue of actually reducing global emissions. The latest UNFCCC conference comes against the backdrop of two grim statistics of recent weeks – the record year on year (2009 to 2010) jump in global emissions just announced by the US Carbon Dioxide Information Analysis Center (CDIAC) and the prospect of an early “lock-in” of a minimum 2°C temperature rise this century, as indicated by the International Energy Agency in mid November.

As society grapples with these issues, the merit of various technologies and emission reduction approaches arises. Some advocate for a rapid switch to renewable energy, others favour nuclear and most argue that unless the efficiency of energy use is robustly tackled then there cannot be a solution. But a closer look at the current state of the global energy system reveals a very different reality.

As developing economy growth has accelerated in recent years energy prices have risen, albeit with rapid increases in both renewable energy deployment and fossil fuel production. Since 2000 the world has added 0.3 billion tonnes oil equivalent (btoe) per annum of non-fossil (zero carbon) energy, but nearly eight times this amount of fossil energy production (BP Statistical Review of World Energy). Even the global financial crisis has caused but a ripple in this trend. Demand is huge and growing. 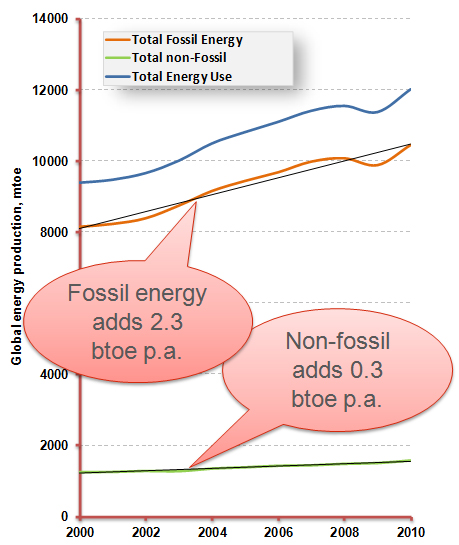 Arguably, we are in a time  where underlying global energy demand exceeds supply. This isn’t to say they are out of balance as that is not possible, but it says that if there were more energy then global economic growth would be even faster. This condition could well persist for a long time given population growth and the rapid expansion of several major economies – with more to follow.

A direct implication of this thinking is that the production of all fossil fuel energy is infra-marginal, i.e. there is nothing at the margin and that even the most expensive to produce barrel or tonne on the planet is profitable at current price levels. Rather, energy prices are increasingly being set by marginal and currently expensive local alternatives such as bio, wind and solar.  The further implication of this is that as developed countries install non-fossil energy supply or reduce their energy use through efficiency measures, the fossil energy that is backed out is simply moved elsewhere and there is no drop in global demand and no drop in global emissions – at all. This condition may also persist for a long time. In addition, in the case of rapidly developing economies such as China, renewable energy deployment is not backing out other fuels, rather it is supplementing a constrained fuel pool and allowing faster economic growth.

This then poses an enormous challenge for global efforts to reduce emissions. The current approach, which increasingly focuses on a “clean / renewable energy” solution, will not deliver a global reduction – at least not for a long time. Nationally there may be significant wins (e.g. the last 20 years has seen the UK reduce emissions through rapid uptake of natural gas), but on a global basis we are simply shuffling the fossil energy supply from one place to another (“Rearranging the deckchairs on the Titanic” comes to mind here).

This then points to one solution in particular, the application of carbon capture and storage (CCS). With no reduction in fossil fuel use, carbon dioxide levels in the atmosphere will continue to rise  unless emissions are returned to their source. This argues for policy development to be tilted towards CCS technology with the goal of full  demonstration and commercialization in the short to medium term.

CCS is efficiently incentivized through a carbon price, although this is only emerging on a fragmented basis. But even national implementation which results in local rather than global CCS deployment can still be considered of global benefit as at least some emissions are captured and stored. As a carbon price becomes more global it does eventually force fossil fuels to the margin. This will then drive a  reduction in consumption as alternative energy sources come into the mix at lower and lower prices, but CCS remains a critical technology for this century at least.

For the UNFCCC process, this means an eventual complete about-face on CCS. Today it represents a glaring gap in the Clean Development Mechanism with CCS projects not even sanctioned for consideration. This at least is up for change in Durban. But longer term, following the thoughts outlined above, CCS should become the only viable offset mechanism for trade between nations given that it represents a tonne of CO2 sequestered. Permanent sequestration through forestry might also be considered. Anything else, no matter how laudable the project, may not actually represent a real reduction in global emissions.