There are many books and thousands of reports on climate change, carbon economics, energy transformation and the like, but few encapsulate the issue as well as a recently released book by Mike Berners-Lee and Duncan Clark, The Burning Question. Judging by the recommendation on the cover, even Al Gore liked it. 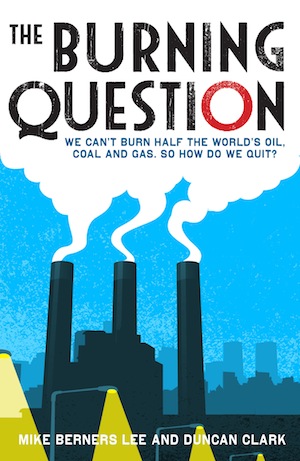 Rather than speculate on the potential severity of climate events or try to convince readers that simple changes in consumer behaviour and green, job creating investment will solve everything, the book takes a thought provoking but dispassionate look at the global energy system. The authors discuss the role of fossil fuels and the carbon emission limits that we know we should meet and set out to explain the rock and the hard place that we find ourselves between. The rock in this case is the trillion tonne of carbon limit for cumulative emissions over time and the hard place is the abundance of fossil fuels, the rate at which we use them and the relative ease with which more becomes available as demand rises.

Berners-Lee and Clark present a compelling set of stories which show how fossil fuels dominate the global energy market, why it is proving almost impossible to displace them (on a global basis) and why strategies such as improving energy efficiency and deploying renewables  are not effective approaches to try and limit global emissions. In fact they make the point that in some instances the reverse happens – emissions just rise faster.

The tag line on the cover includes the teaser  “So how do we quit?” (using fossil fuels). Do they really know? As the book unfolds and the problem they describe mounts in both complexity and difficulty, there is almost the feeling of a thrilling ending around the corner. SPOILER ALERT. Sadly this is not quite the case, but they do give some useful advice for policy makers trying to get to grips with the issue and the book itself gives the reader a very different perspective on the energy-climate conundrum (although hopefully one that the readers of this blog have picked up over time, but here it is all in one book).

I assume that for similar reasons to my own line of thinking (but after beating around the bush about it for 181 pages) they do finally land on a key thought:

In the course of writing this book we have come to think that the most undervalued technology in terms of unlocking international progress on climate change is carbon capture – both traditional CCS for point sources such as power plants and more futuristic ambient air capture technologies for taking carbon directly out of the atmosphere.

It would appear that The Inconvenient Truth and CCS are indeed inextricably linked. Clark and Berners-Lee don’t go so far as to argue that CCS is the convenient answer, but the message on CCS is a strong one. Nevertheless, geoengineering makes a surprise entrance at the end!!

Overall, this is an excellent discussion which is both easy to ready and hugely informative. It is well worth putting it on the summer reading list.