With much anticipation but little more than 24 hours of media coverage, the Intergovernmental Panel on Climate Change (IPCC) released the next part of the 5th Assessment Report, with Working Group II reporting on Impacts, Adaptation and Vulnerability. The report started with the very definitive statement;

Human interference with the climate system is occurring . . .

But this was immediately followed by a statement that set the scene for the entire assessment;

. . . . and climate change poses risks for human and natural systems.

The key word here is “risk”. This report attempted to explain the risks associated with rising levels of CO2 in the atmosphere and demonstrate how the impact risk profile shifts depending on the eventual change in surface temperature and the response to this through adaptation measures. Unfortunately, the subtlety of this was largely lost in the media reporting.

For example, although the Guardian did use the “risk” word, it chose to open one of its many stories on the new report with the statement;

Australia is set to suffer a loss of native species, significant damage to coastal infrastructure and a profoundly altered Great Barrier Reef due to climate change . . . .

This was under the headline “Climate change will damage Australia’s coastal infrastructure“.

The IPCC report didn’t actually say this, rather it presented a risk assessment for coral reef change around the coast of Australia under different emission and temperature scenarios. This was summarised, along with a wide variety of other impact risks, in a useful chart form with the Australian coral extract shown below.

Of course it is the job of the media to translate a rather arcane and technical report into something that a much larger number of people can understand, but it is nevertheless important to retain the key elements of the original work. In this case, it is the risk aspect. With very few exceptions, there is no “will” in this subject, only “could”. Some of those “could” events have a very high level of probability (the IPCC use the term “virtually certain” for 99% probability), but this still doesn’t mean it is certain.

There has been an increasing tendency to talk about climate change in absolutes, such as “stronger hurricanes”, “more violent storms” and “a profoundly altered Great Barrier Reef”, when in fact this isn’t how the science describes the issue. Rather, it is how the media and others have chosen to describe it. This isn’t to say that these risks should be dismissed or ignored, they are real and very troubling, but the outcomes are not a given. Hopefully as others have time to digest the latest IPCC work, this aspect of the story becomes more prominent.

Taking this a step further though, it would appear that even the IPCC have chosen to present the risks with a slight skew. Although they are completely transparent about all the material they have used to build their case, the final presentation in the risk charts doesn’t tell the full story. They have chosen to present only two scenarios in the summary document, the 2 ºC case and the 4 ºC case. There is much to say between these and arguably, the space between 2 and 4 is where the real risk management story lies.

This was analysed in 2009 by the MIT Joint Program, in their report Analysis of Climate Policy Targets under Uncertainty. The authors demonstrated that even a modest attempt to mitigate emissions could profoundly affect the risk profile for equilibrium surface temperature. In the chart below five mitigation scenarios are shown, from a “do nothing” approach to a very stringent climate regime (Level 1, akin to the IPCC 2 ºC case). They note in the report that:

An important feature of the results is that the reduction in the tails of the temperature change distributions is greater than in the median. For example, the Level 4 stabilization scenario reduces the median temperature change by the last decade of this century by 1.7 ºC (from 5.1 to 3.4 ºC), but reduces the upper 95% bound by 3.2oC (from 8.2 to 5.0 ºC). In addition to being a larger magnitude reduction, there are reasons to believe that the relationship between temperature increase and damages is non-linear, creating increasing marginal damages with increasing temperature (e.g., Schneider et al., 2007). While many estimates of the benefits of greenhouse gas control focus on reductions in temperature for a reference case that is similar to our median, these results illustrate that even relatively loose constraints on emissions reduce greatly the chance of an extreme temperature increase, which is associated with the greatest damage. 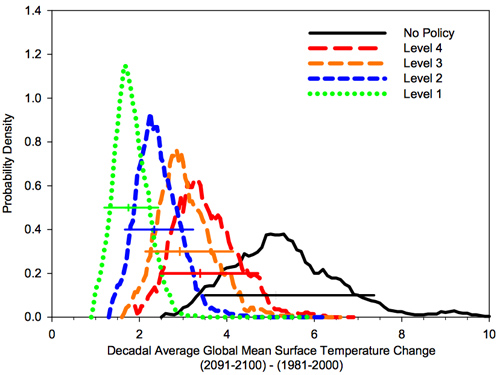 There is a certain orthodoxy in only looking at 2 and 4 ºC scenarios. It plays into the unhelpful discussion that seems to prevail in climate politics that “it must be 2 ºC or it’s a catastrophe.” I posted a story on this late last year. As it becomes increasingly clear that the extreme mitigation scenario required for 2 ºC simply isn’t going to happen, society will need to explore the area between these two outcomes with a view to establishing what can actually be achieved in terms of mitigation and to what extent that effort will shift the impact risk. Maybe this is something for the 6th Assessment Report.