The past few weeks, highlighted by the Business & Climate Summit in Paris and Carbon Expo in Barcelona, has seen many CEOs, senior political figures and institutional leaders call for increased use of carbon pricing. This is certainly the right thing to be saying, but it begs the question, “What next?”. Many countries are already considering or in the process of implementing a carbon pricing system, but still the call rings out. While uptake of carbon pricing at national level certainly needs to accelerate, one critical piece that is missing is some form of global commonality of approach, at least to the extent that prices begin to converge along national lines.

On Monday June 1st six oil and gas companies come together and effectively called for such a step in a letter from their CEOs to Christiana Figueres, Executive Secretary of the UNFCCC and Laurent Fabius, Foreign Minister of France and President of COP 21. Rather than simply echo the call for carbon pricing, the CEOs went a step further and specifically asked;

Therefore, we call on governments, including at the UNFCCC negotiations in Paris and beyond – to:

To support progress towards these outcomes, our companies would like to open direct dialogue with the UN and willing governments.

The request is very clear – this isn’t just a call for more, but a call to sit down and work on implementation. The CEOs noted that their companies were already members of, amongst other bodies, the International Emissions Trading Association (IETA). IETA has been working on connection of (linking) national systems for well over a year (although the history of this effort dates back to the days of the UNFCCC Long Term Cooperative Action – LCA – workstream under the Bali Roadmap) and I am co-chair, along with Jonathan Grant of PWC, of the team that is leading this effort.

Late last year IETA published a strawman proposal for the Paris COP, suggesting some text to set in place a longer term initiative to develop an international linking arrangement. I spoke about this at length to RTCC at Carbon Expo in Barcelona. 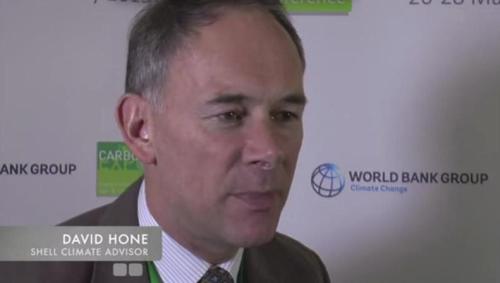 From my perspective, this week wasn’t just about carbon pricing, but also about climate science. On the same day that the FT published its story on the letter from the oil and gas industry CEOs, The Guardian chose to run a front page story implying that I had tried to detrimentally influence (apparently being a former oil trader!!) the content of the London Science Museum’s Atmosphere Gallery, a display on climate science that Shell agreed to sponsor some years ago. The reporter had based his story on exchanges between Shell and the Science Museum staff when the gallery was looking to do a recent refresh.

I did engage in such a discussion and I did make some suggestions as to content which I thought was new and interesting since the Atmosphere Gallery was first established. Unfortunately The Guardian wasn’t able to publish my proposals as they were put forward during a meeting between me and two staff members from The Science Museum, so to complete the story I will publish them here. Although this particular piece of science dates back to a 2009 Nature article by Oxford University’s Professor Myles Allen and his team, it didn’t feature in the Gallery when it was first put together (the Advisory Panel met during 2009 as part of the design phase of the Gallery). But today, it is the foundation work behind the concept of a global carbon budget which has become a mainstream topic of discussion. My angle on this was to illustrate the importance of carbon capture and storage in the context of this science, but with an emphasis on the science itself. My discussion with The Science Museum staff members took place on 23rd June 2014 and I asked them to consider the following for the refresh of the gallery:

1. As background, three papers that have come from Oxford University:

2. Consider using (or adapting) a trillion tonne video made by Shell where Myles Allen talks about CCS in the context of the cumulative emissions issue:

3. Consider putting the Oxford University fossil carbon emissions counter in the Atmosphere Gallery as this would help people understand the vast scale of the current energy system and the rate at which we are collectively approaching the 2°C threshold;

5. Offer the use of the Shell “CCS Lift” (an audio-visual CCS experience) to help explain this technology to the gallery visitors.

My pitch to The Science Museum was that this approach offered a real opportunity to feature the Science Museum and the Atmosphere Gallery in the very public discussion on carbon budgets, get some good media attention in the run-up to Paris 2015 (e.g. through the very visible counter), tell the CCS story in context (the Myles Allen video and the CCS audio-visual display) and raise awareness of the cumulative nature of the problem (i.e. the science). In the end they decided not to use this material, but I stand by the proposal.