The call was very clear, here were “four demands” for Paris COP21 being presented to a group in London. But the surprise was the presenter; not a climate focussed NGO or an activist campaigning for change, but Fatih Birol, Chief Economist for the International Energy Agency. He was in an optimistic mood, despite the previous two weeks of ADP negotiations in Bonn that saw almost nothing happen. He opened the presentation by saying “This time it will work” (i.e. Paris, vs. Copenhagen and all the other false starts).

On June 15th Mr Birol launched the World Energy Outlook Special Report: Energy and Climate Change. The IEA usually launch a special supplement to their annual World Energy Outlook (WEO) and this one was the second to focus on the climate challenge and the policy changes required for the world to be on a 2°C emissions pathway. It was also something of a shot over the bow for the Paris COP21 process which had just completed another two weeks of negotiations in Bonn, but with little to show for the effort. Mr Birol is a master of such presentations and this one was memorable. He focussed almost entirely on the short term, although the publication itself looks forward to 2030 for the most part. With regards to the energy system, short term usually means 5 years or so, but in this case short term really meant December but with the resulting actions being very relevant for the period 2016-2020.

Mr Birol outlined four key pillars (as they are referred to in the publication) for COP21, but restated them as “demands”. They are;

Mr. Birol didn’t mention CCS either, which is perhaps more understandable given the 5 year focus of much of the publication. However, Chapter 4 within the publication deals extensively with CCS and the IEA highlights the importance of CCS in their 450 ppm scenario through the chart below. 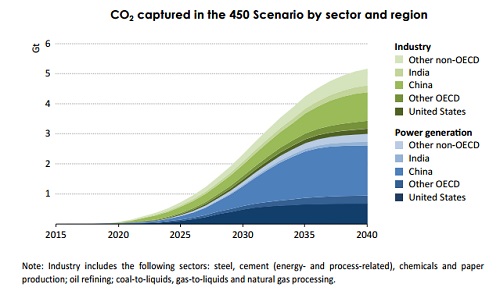 Finally, there was some discussion around the climate statement made by the G7 the week before and their commitment out to 2100. Looking at the statement released by the G7, they said;

“. . . . .we emphasize that deep cuts in global greenhouse gas emissions are required with a decarbonisation of the global economy over the course of this century. Accordingly, as a common vision for a global goal of greenhouse gas emissions reductions we support sharing with all parties to the UNFCCC the upper end of the latest IPCC recommendation of 40 to 70 % reductions by 2050 compared to 2010 recognizing that this challenge can only be met by a global response.”

My reading of this is that the G7 are recognizing the need to be at or nearing global net zero emissions by 2100. However, this isn’t how the statement has been reported, with several commentators, media outlets and even one of the presenters alongside Fatih Birol interpreting this as an agreement to be fossil fuel free by 2100. These are two very different outcomes for the energy system; the first one potentially feasible and the second being rather unlikely. Both the Shell Oceans and Mountains New Lens Scenarios illustrate how a net zero emissions world can potentially evolve, with extensive use of CCS making room for continued use of fossil fuels in various applications. The core driver here will be the economics of the energy system and the competitiveness of fossil fuels and alternatives across the full spectrum of needs. It is already clear that alternative energy sources such as solar PV will be very competitive and could well account for a significant proportion of global electricity provision. Equally, there are areas where fossil fuels will be very difficult to displace; I gave one such example in a case study I posted recently on aviation. Energy demand in certain sectors may well be met by fossil fuels for all of this century, either with direct use of CCS to deal with the emissions or, as illustrated in the IPCC 5th Assessment Report, offset by bio-energy and CCS (BECCS) elsewhere. Unfortunately the nuances of this issue didn’t make it into the IEA presentation.

That’s it from me for a couple of weeks or so. I am heading north on the National Geographic Explorer to see the Arctic wilderness of Svalbard and Greenland.