Shell has over 40 years’ experience in developing energy scenarios*, but the expertise to assess the physical climate impacts of these doesn’t exist within the company. While it is relatively easy to calculate the cumulative carbon emissions over the course of the 21st century for a given scenario and then equate this to some level of climate warming, a more accurate and complete look at the physical impacts, including warming itself, of a certain energy pathway can only come from a comprehensive earth systems model.

For such an assessment, Shell has turned to the MIT Joint Program on the Science and Policy of Global Change. We first worked in this manner with MIT in 2008 when there was a mutual interest in looking more deeply at the previous set of Shell energy scenarios (Blueprints and Scramble) alongside a number of other scenario studies, releasing a paper on the work towards the end of that year. At the request of Shell, a new assessment has just been completed by MIT, this time looking at the New Lens Mountains and Oceans scenarios which were first published in 2013. The paper is now available on the Joint Program website. The analysis also included scenarios based on different pathways following COP21 and a reference MIT 2°C scenario which assumes the necessary globally uniform carbon tax to deliver such an outcome.

MIT used their Integrated Global Systems Model (framework shown below) to do the work in 2008, which has been repeated over 2015 for the current work. The model has evolved considerably since then, particularly in the areas of 3D analysis (e.g. 3D atmosphere), regional granularity, agriculture and land use. 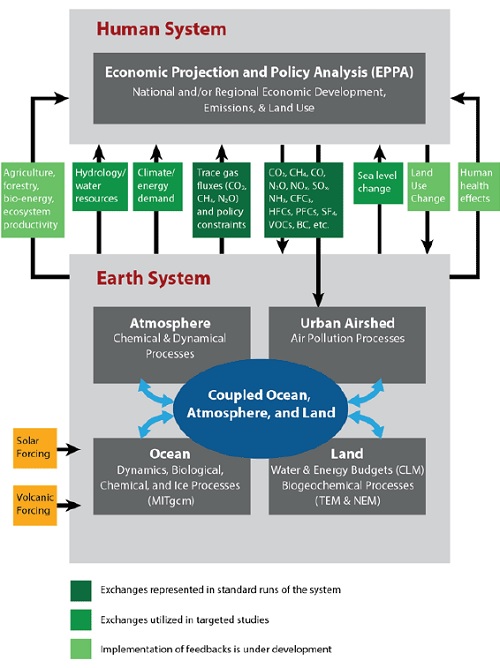 Energy system carbon dioxide emissions for the five scenarios in the analysis are shown below (NCP2020 represents a “no climate policy” pathway and Outlook reflects the COP21 INDCs but without the assumption that they are rigorously improved on over the years). Importantly, the Shell scenarios approach net-zero carbon dioxide emissions by the end of the century, effectively limiting the accumulation of this gas in the oceans-atmosphere system. The total cumulative anthropogenic emissions over time is strongly linked to the amount of climate system warming.

Both Shell scenarios see the progressive and widespread introduction of policies to manage emissions. In the Oceans scenario this appears as a market response triggered by government implemented carbon pricing that develops globally over time. Solar PV dominates in this scenario. In the Mountains scenario a more regulatory based approach is implemented, which sees the rapid emergence of carbon capture and storage (CCS) in particular. Both Shell scenarios result in a stabilization of CO2 in the atmosphere in the latter years of the century, although at levels higher than for the 2°C reference case. This means a 2100 temperature outlook +/- 2.4°C above pre-industrial levels for the Mountains scenario and +/- 2.7°C for the Oceans scenario.

The MIT report tackles a number of impact issues, including global precipitation, ocean acidity, sea level rise, water stress, air quality and agricultural yields. The sea level rise projections are based on thermal expansion of the oceans and melting of mountain glaciers, but not through major changes in the permanent ice shelves (Greenland and Antarctica) where there remains great uncertainty with regards the outlook.

The scenarios show that significant policy measures are needed to stabilize temperatures and climate impacts. MIT conclude that more stringent emission reduction scenarios (Oceans, Mountains, 2°C) are successful in mitigating a large portion of water stress impacts and air pollution damages. They also cap the ocean acidity increase, while agricultural yields are still strongly affected. The report notes that these projections show a significant value of policies that may not end up in 2°C stabilization but fall substantially close to that target by the end of the century.

* Shell Scenarios are part of an ongoing process used in Shell for 40 years to challenge executives on the future business environment. We base them on plausible assumptions and quantification, and they are designed to stretch management to consider even events that may be only remotely possible. Scenarios, therefore, are not intended to be predictions of likely future events or outcomes and investors should not rely on them when making an investment decision with regard to Royal Dutch Shell plc securities.