The Parties to the Paris Agreement spent the first two weeks of May in Bonn, discussing amongst other things, the so-called rule book of the Paris Agreement. There was some progress, but the issues on the table are far from settled, to the extent that another negotiating session has been slotted in between now and COP24. That session will take place in Bangkok in early September.

The question on my mind is whether the pace is sufficient for setting out the conditions for countries to start ratcheting up their Nationally Determined Contributions (NDC) and shifting the current combined emissions trajectory from one that is potentially 3+°C to something that is closer to ‘well below 2°C’. The required changes are significant, as we noted in the recently released Sky scenario. For example, in the first 5-year period which is now opening with the Fijian inspired Talanoa Dialogue, we imagined a ratchet as sizable as China contributing a sharply falling emissions profile by 2030, rather than a peaking of emissions around 2030. Similarly, in the second NDC cycle from 2023-2028, a country such as India would contribute a clear peak in emissions in the 2030s. This would be a significant step up from the current contribution based largely on expansion of renewable energy in the electricity sector, efficiency and forestry, with a decline in emissions intensity of GDP, but no indication of absolute emissions limits. 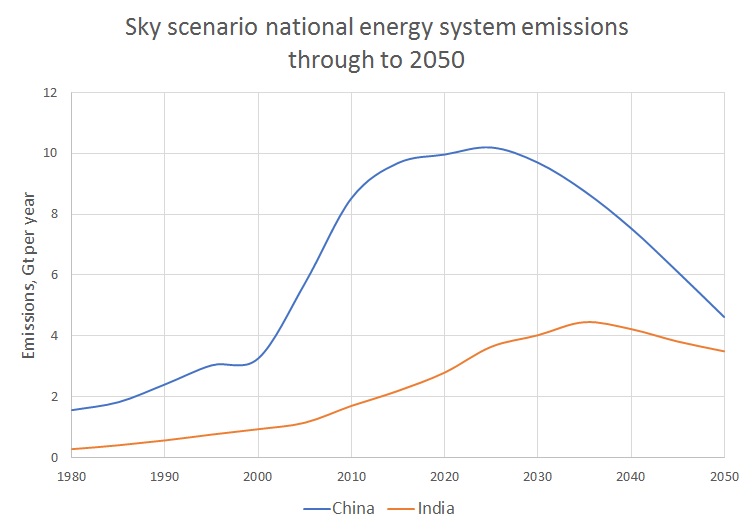 While the formulation of NDCs isn’t necessarily dependent on the outcome Paris Agreement rulebook, the Paris Agreement still plays a critical role in driving the necessary changes. We identified the elements of this in the Sky scenario through the scenario framework within which Sky sits. 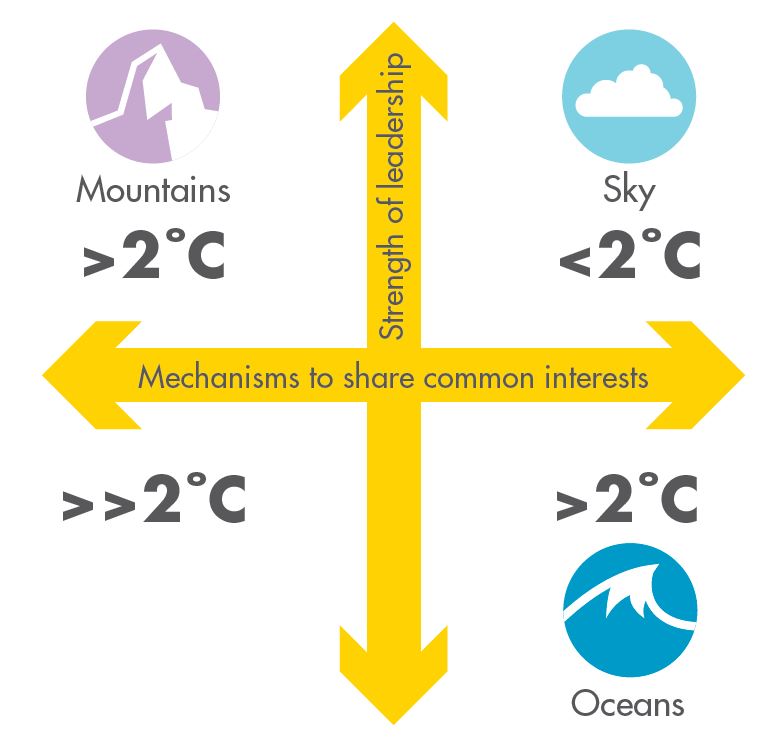 The elements of the framework are the necessary mechanisms to share common interests and the strength of leadership to take these forwards. The mechanisms start with the UNFCCC and the Paris Agreement at the top, but include various multilateral institutions and important initiatives such as the C40 and RE100. These then require strong leadership to function effectively and extract maximum value. In the runup to the Paris Agreement, the world occupied this space with many institutions rising to the challenge of formulating an agreement, propelled by very active leadership from the likes of the UNFCCC Executive Secretary, Christiana Figueres and many heads of government.

In Sky, the level of effort and action that delivered Paris should perpetuate for many years to ensure the Agreement takes root, yet it wasn’t apparent to me when I was in Bonn that this was the case. The discussions on Article 6 of the Agreement are reflective of the whole, although the negotiators discussing Article 6 have probably made more progress than most. Nevertheless, progress is slow and the big picture seems to be getting lost in the detail.

For example, one aspect of the discussion around the mechanism under 6.4 is focusing on provisions for projects that might be outside the scope of the NDC and how any carbon reduction units from such projects should be handled by receiving countries. But the discussion has missed a vital point, in that if there is broad application of such a provision then the Paris Agreement itself could be in trouble, because we should see the NDCs expand rapidly to cover all activities. As such, there shouldn’t be any projects outside the scope of the NDCs.

Part of the reason for considering projects outside the NDCs is that if they sit inside, then the movement of carbon units beyond the border of the host country for use by someone else will require a corresponding adjustment to the NDC – I discussed this in my previous post. This then opens another set of issues, around accounting. Corresponding adjustments should require full quantification of the NDC in CO2 terms, which takes the NDC into the territory of carbon budgets. Many countries don’t want this, but it is an inevitable outcome if the Paris Agreement is to work. So there is something of a Catch 22 building up, in that negotiators are avoiding the need for robust carbon accounting by negotiating a set of conditions that could undermine the Agreement itself, which in turn would undermine the value of the carbon units they are seeking to create. Unlike some Catch 22s, there is a simple way out here – embrace accounting and embrace the expansion of NDCs.

Moving forward requires leadership, which isn’t absent, but has certainly changed since 2015. There is something of a global trend back to nationalism and away from multilateralism, which potentially takes the world out of the top right region of the matrix. This in turn challenges the ultimate outcome of the Agreement, to limit surface temperature warming to well below 2°C. In Sky, we noted the following;

Achieving net-zero emissions in just 50 years leaves no margin for interruption, stalled technologies, delayed deployment, policy indecision, or national back-tracking. Rather, it requires a rapid acceleration in all aspects of an energy transition and particularly robust policy frameworks that target emissions. Success can be accomplished only through a broad process that is embraced by societies, led by governments, and lightly coordinated by organisations including the UNFCCC, the EU, ASEAN, and others.

In the context of the NDCs it means rapid expansion to cover all activities and full transparency through robust carbon accounting and quantification. But there is still some distance to travel before such an outcome is realised.

Note: Scenarios are not intended to be predictions of likely future events or outcomes and investors should not rely on them when making an investment decision with regard to Royal Dutch Shell plc securities. Please read the full cautionary note in http://www.shell.com/skyscenario.