Perhaps the biggest policy development of 2020 (possibly lasting through to 2023 or so as all the legislative requirements are agreed and put in place) will be the EU laying the foundations for its declared goal of net-zero emissions by 2050. Although the goal of net-zero was always there as an intention, the date of 2050 brings it close enough to require policy makers to give thought and then substance to the mechanisms that will deliver it. One such mechanism is the EU Emissions Trading system, which has now been operating for 15 years (but effectively 20 years from a design perspective) and covers the large emitters across the EU as well as encompassing intra-EU aviation.

The EU ETS functions by progressively reducing the number of allowances available to emitters on a linear trajectory, which means that under current plans the number of allowances issued each year will fall by about 48 million units, with 2020 allocation limited to around 1.8 billion allowances. Subsequent phases of the EU ETS, potentially including the current Phase IV, will need to see an increase in the annual reduction of allowances such that the system reaches zero in 2050. Based on a continuation of the EU ETS under the current trajectory it won’t reach zero until the late 2050s. A revision in the system could operate from the start of Phase IV, i.e. in January 2021, which means that the current 2030 goal would change. If the revision comes in from the start of Phase V, then that implies an even steeper decline for the period 2031 to 2050.

While the mechanics of the cap-and-trade architecture is very simple, the reality of 2050 is not. Under a revised EU ETS, from January 1st 2050 (or perhaps 2051) there will be no further allocation of allowances, either by auction or freely given. Yet this may not be a time in which there are no emissions – thirty years is possibly insufficient time for the complete turnover of everything in the large emitters system. Some industrial facilities, much of the aviation sector and even some power stations in parts of Europe may still be using fossil fuels as their energy source or will be emitting carbon dioxide from a conversion process (e.g. cement manufacture). Any remaining banked allowances and allowances in the Market Stability Reserve (MSR) will be quickly consumed against these ongoing remaining emissions.

The potential for remaining EU emissions can be seen in the Shell Sky Scenario, released in 2018. Even though the scenario represents a period of very rapid energy system and industrial transition, the time from now to 2050 isn’t sufficient to bring heavy industry, aviation and power generation to zero. Even in 2070 significant aviation emissions remain and require balancing with the net negative situation reached in the power sector through the deployment of bioenergy with CCS. 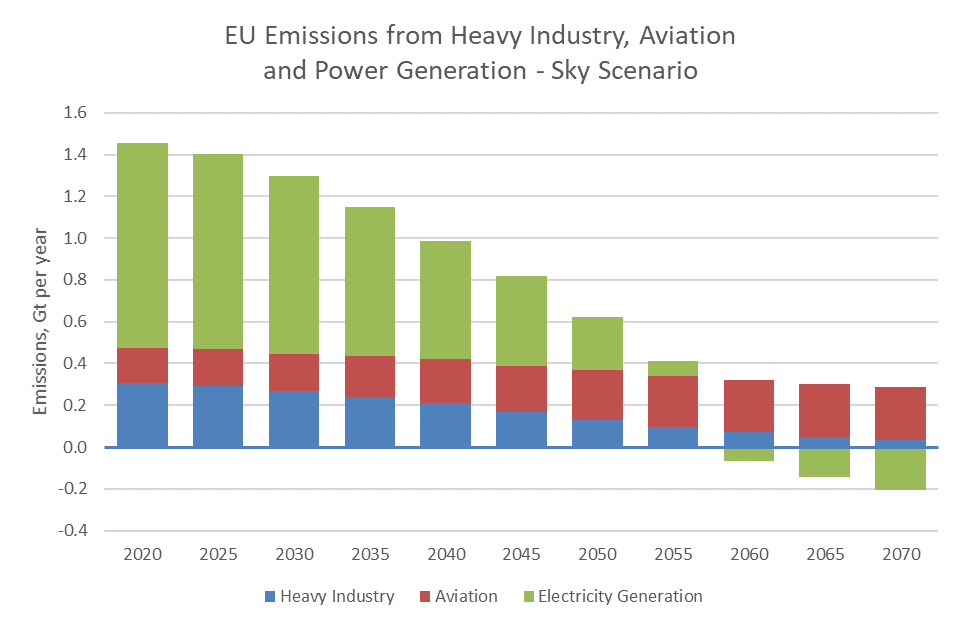 N.B. Sky aviation emissions include international aviation whereas the EU ETS does not.

So how will the EU ETS work once it runs out of allowances?

The key to the future operation of the EU ETS lies within the objective it is trying to deliver, net-zero emissions. Net-zero means that there is a balance between remaining emissions and the removal of the equivalent amount of carbon dioxide form the atmosphere, i.e. a sink. This stems from Article 4 of the Paris Agreement;

However, the EU ETS is currently an allowance issuance and surrender system, which points to a change in its structure at some point in the period leading up to 2050. This would require the introduction of a unit into the EU ETS that represented a ton of carbon dioxide removed from the atmosphere and permanently sequestered. From 2050, the EU ETS would then become a system without allowances that managed the balance between remaining emissions and sinks, at least until emissions actually reached zero. Policy makers would need to define the parameters of the unit such that it could be relied upon to provide sufficient volume for the required balance. Two considerations would be key;

These units wouldn’t be issued directly by the EU governments in the way allowances are today, but would be made available for sale to emitters from projects that sequestered carbon dioxide. Governments would of course be involved in issuance of units to the sequestration projects against verified permanent storage of carbon dioxide.

A further consideration would be when such a unit is introduced into the EU ETS and how sufficient removal capacity is developed prior to 2050 to ensure there is enough available when net-zero emissions is required. This will be a judgment call arrived at through transition scenario analysis. However, the point in time when the unit will first be needed is not 2050, but when the allowance decline pathway first crosses the actual decline in emissions pathway. The illustration below shows how this might happen as reductions become more challenging over time. 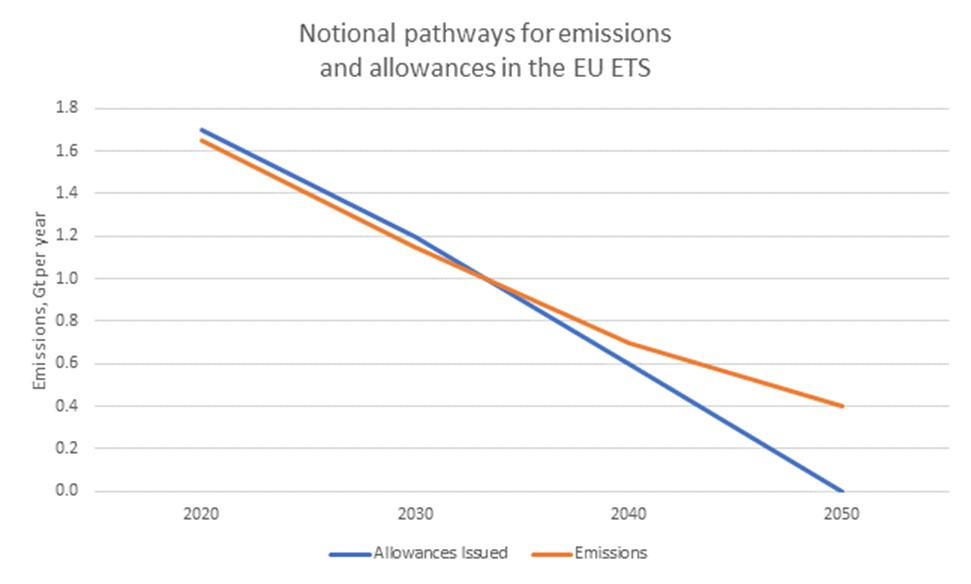 To date, the actual reduction in emissions has typically been faster than the decline in allowance availability, hence the allowance surplus that developed in the 2010s and the creation of the MSR which has acted as an allowance removal mechanism (but it can also return allowances). These lines could potentially cross at some point in the 2030s, so the point of introduction could be at the start of Phase V of the ETS, i.e. 2031.

The EU Commission has developed a similar chart for their own communications, although this is for the transport sector as a whole, much of which is not currently covered by the EU ETS. However, expanding coverage is another option on the table. If such an expansion introduces more activities that may have remaining emissions in 2050, then the need for a sink unit becomes more important.

A provision such as described above might be seen by some as a backstop in EU ETS, but nevertheless an essential one for continuing smooth operation of the system. Without it, the EU ETS could become unstable  in the years approaching 2050 as immediate mitigation opportunities for remaining emissions become unavailable and there are insufficient allowances available to cover these emissions.