We left the Antarctic Peninsula in something of a rush on Tuesday morning. The expedition arose early to view the incredible Lemaire Channel, which narrows to some 800 metres with mountains of at least that height rising vertically from the channel itself on both sides. But the weather was dreadful and whilst we got some idea of the majesty of this scene, we really saw very little. Our first scheduled stop after the Lemaire was pretty much a washout as well. Apart from the hardy satellite guys who need the steadiness of dry land to upload the various blog posts and other messages, none of us made it ashore.

A few Zodiac excursions were arranged, but those onboard (me included) were soaked through within minutes as waves broke relentlessly over the bow of these tiny vessels and driving snow, ice and wind made it almost impossible to make progress.

An early executive decision was made to abandon plans for our last shore visit and head back to Ushuaia instead, given that the storm we were now in the midst of could make progress across the Drake Passage pretty slow. So we headed off into a Force 8 gale and the Drake gave us its best (well we thought it was pretty bad but the old hands on board still insisted it was nothing much).

Not many made it to dinner that evening as sea legs proved to be less than ready for the onslaught. The Akademic Ioffe is a brilliant ship and very stable, but 6+ metre waves lifted the ship high out of the water with the flipside zero G feeling as the vessel dropped down the back side of the swell to sea level. After a dozen or so of these in the space of a few minutes most have had enough – but this is like a broken carnival ride – there is no getting off. 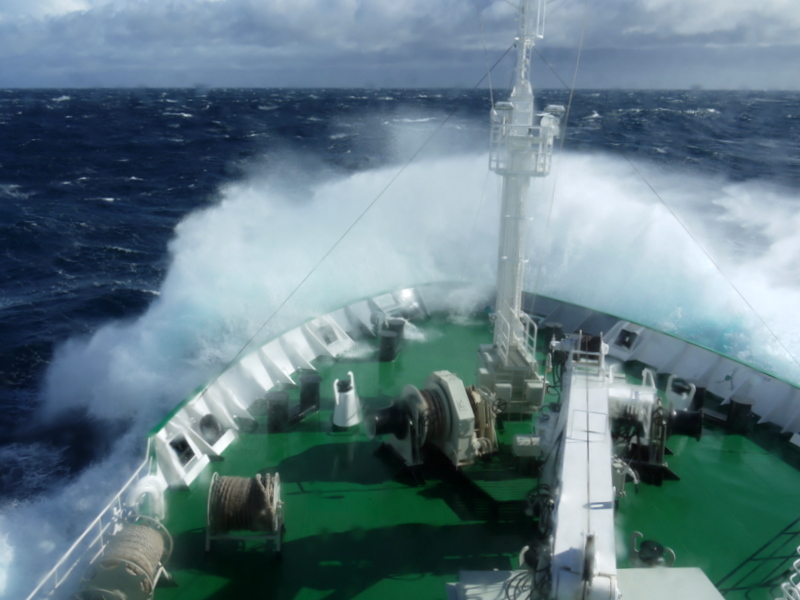 The storm passed but the rest of the passage was rough nevertheless. On Thursday afternoon (March 26th) we spotted Cape Horn and officially “rounded the Horn” together with the cruise ship Amsterdam heading in the opposite direction.

So now I am back in Buenos Aires, but still a day from London. It took most of today to get from Ushuaia to here, with delays and distance rminding me that Antarctica really is a distant land.

Plotting the course across the Drake.