After a short telephone interview yesterday, I was quoted in the Guardian newspaper today, but unfortunately completely out of context. Based on the interview, The Guardian chose to position Shell as opposing action in Copenhagen, which couldn’t be further from the truth. In fact the conversation was about the application of a floor price for the EU-ETS.  You may be interested in my reply which I hope will be published on Monday.

In today’s article “Shell opposes moves to reform carbon trading”, you chose to open with the assertion that Royal Dutch Shell is opposing moves to overhaul Europe’s carbon trading scheme at the crucial climate change summit in Copenhagen in December. This statement is incorrect on several counts;

However, the quote that you did include from me was correct. Shell does not support a floor price within the EU-ETS. This is a market based system and the market needs to be left to find the price that is required to deliver the necessary reductions to meet the clear environmental objective of the system. Today, as a result of the financial crisis and a consequent reduction in emissions across the EU due to lower industrial activity, the market is telling us that it can meet the 2020 20% reduction objective at a price of around EUR 15. We should respect this and allow the market to do its job. The lower price is coming at a time when EU consumers are tightening their belts so they may welcome this reduction in price, which feeds primarily into their cost of electricity.

We also note that there is no specific mechanism within the design of the EU-ETS to set a floor price. However, EU governments do auction allowances into the system so they could choose to set a reserve price at those auctions. But the majority of allowances are still provided free of charge to EU emitters and that practice will continue for three more years. By then, we may be seeing quite a different set of market conditions and even a different overall 2020 target, as the EU has a provision to shift this to 30% should it be a signatory to a new international agreement. 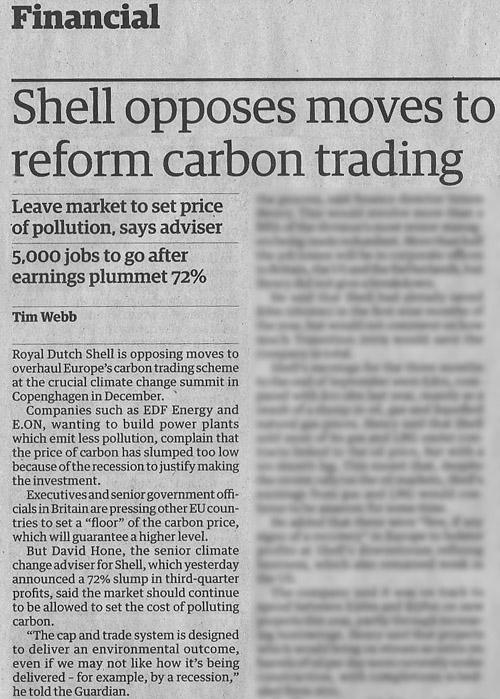