In his speech to the nation this week, President Obama referred to the huge level of resource that the United States was able to muster as it turned its industrial capacity to the production of military equipment during World War II.

The one answer I will not settle for is the idea that this challenge is too big and too difficult to meet.  You see, the same thing was said about our ability to produce enough planes and tanks in World War II.

One of the best examples of this transformation and a symbol of US wartime industrial output was the production of “Liberty Ships”. These were cargo ships built for the dangerous trans-Atlantic run when U-Boats were an ever-present hazard. During the period 1941 to 1945 eighteen American shipyards built 2,751 vessels, easily the largest number of ships produced to a single design. The ships were constructed in sections, built in assembly line style, that were then welded together. This in itself was a new technique requiring new skills. Early on the ships took the best part of a year to build, but the average eventually dropped to 42 days (with a much heralded record of 4 days and 15½ hours for the Robert E. Peary).

A modern day clean-energy comparison for the United States might be the production of wind turbines. Today, US installed wind capacity is some 40 GW, growing at a rate of over 10 GW per annum, more than triple the rate seen just five years ago. Manufacturing capacity is growing rapidly as well due to both foreign and domestic investment. The number of manufacturers assembling nacelles in the U.S. increased from one in 2004 (GE) to five in 2008. There are at least 11 blade manufacturers and 16 tower manufacturers with plants open or planned in the United States [Source: American Wind Energy Association]. Although nacelles, towers, blades and other components are not all made by the same manufacturers or even in the same country, on balance US manufacturing capacity has increased several fold, but not yet at the rate of Liberty ships.

Given current aspirations for clean energy deployment and therefore the potential for some 150-200 GW of installed wind capacity by 2020, further opportunity exists. A step change on the scale of Liberty ship capacity could see the USA not only meeting its own demand for turbines, but also becoming an exporter of equipment. If a Liberty ship could be equated to, say, 10 MW of installed wind capacity (2 large turbines over 100 metres high vs. 4,000 tons of steel in a 135 metre length Liberty ship), then maximum wartime capacity of Liberty ships might be similar to manufacturing 2500+ turbines per annum, enough to reach the installed capacity demand through to 2020. Of course the USA manufactured much more than just Liberty ships during the war, so arguably even more industrial capacity could be directed to clean energy projects. 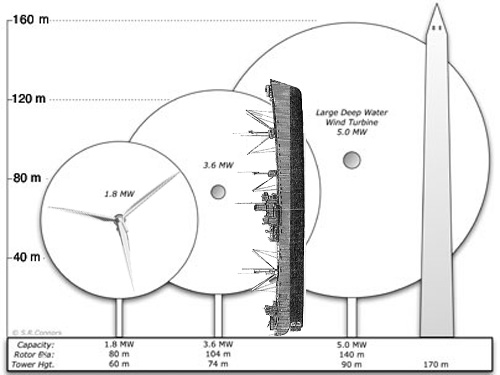 The war provided a powerful central policy driver for Liberty ship development and deployment. Today, energy policy is, by comparison, fragmented and uncertain so the full potential of the economy to deliver is probably not being realised. A single economy wide approach, such as putting a price on carbon [e.g. via a cap-and-trade construction] could provide the necessary drive and certaintly to allow a further rapid scale-up of US capacity to deliver change.