As Australia struggled through the ill fated CPRS legislation and finally landed with its carbon pricing mechanism, I often thought that it would be much simpler if they just joined the EU ETS. Governments don’t tend to do simple practical things like that, perhaps it makes them feel they are giving away some portion of national sovereignty or that they aren’t doing the job they were elected for (i.e. “we must invent it here” syndrome). But despite all this and having gone the very long way around to get there, Australia has, in effect now joined the EU ETS (or perhaps the ETS has joined the Australian trading system).

Last week the Australian Government and the European Commission announced that their respective emission trading systems would link up progressively over Phase III of the EU system, but for Australian entities from the start of full carbon allowance trading in 2015. This is a bold move by both parties and quite possibly one that will make others with nascent trading systems sit up and think about where they want to go. For Australia, provided the changes can be implemented by a parliament that isn’t exactly friendly towards carbon pricing (but a wafer thin majority currently is), the move cements the system into place even further, in that undoing it would likely cause some embarrassment on the international stage. For the EU, it puts the ETS back in the frame and maybe introduces some additional demand at a time of allowance oversupply, depressed prices and a consequent lack of confidence in the system. Let’s hope this move helps both sides to deliver confidence and stability in their respective systems.

A full two-way link between the two cap and trade systems will start no later than 1 July 2018. Under this arrangement businesses will be able to use carbon units from the Australian emissions trading scheme or the EU Emissions Trading System (EU ETS) for compliance under either system. To facilitate linking, the Australian government will make two changes to the design of the Australian carbon price:

In recognition of these changes and while formal negotiations proceed towards a full two-way link, an interim link will be established enabling Australian businesses to use EU allowances to help meet liabilities under the Australian emissions trading scheme from 1 July 2015 until the full link is established.

Various Australian, EU and other websites cover all the details, so I won’t repeat them here. Rather, let me spend some time on a key issue that this move raises, namely the future design of any international framework via the UNFCCC (or other process). Both Australia and the EU have stressed that this is a bilateral linkage, to the extent that the allowance transactions will not be processed through the International Transaction Log (ITL), but CER transactions will be. However, there will still be a Kyoto AAU balancing at various times to ensure compliance in that system (although there remains considerable uncertainty with regards the issuance of Kyoto Second Period AAUs as there has been no firm agreement on the full nature of that period).

Despite this apparent distancing from the Kyoto based ITL, it must still be the case that the overarching Kyoto framework has helped this linkage – I might even go a step further here and say “allowed this linkage to happen”. Thanks to the UNFCCC architecture, these two systems grew up with enough harmony to make a linkage possible.  They “count” the same way, “track” the same way and “comply” the same way.  Both the systems have common offset arrangements through CERs under the Kyoto Clean Development Mechanism and the units created under the Australian Carbon Farming Initiative are also Kyoto compliant. This means we have the makings of a linked system with global reach.

This could be the primary goal of a new international framework, i.e. to provide sufficient tools, rules and mechanisms which countries can use in developing their carbon trading systems, thus facilitating linkage at a convenient time for those interested in doing so. Such a linkage framework could deliver the global market that we need, as shown in my illustration below (which by the way has been around for about 5-6 years now, so for me it is great to see that one of my linkage lines has finally been filled in!!). 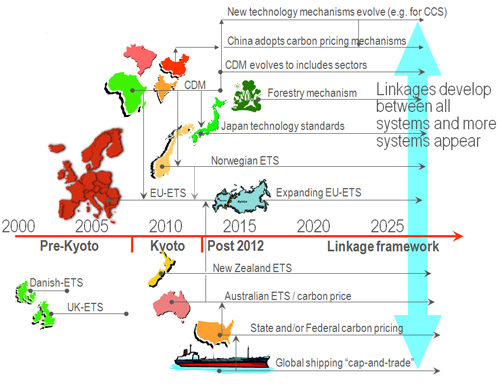 The opportunity to devise such a framework now exists under the Durban Platform for Enhanced Action, which aims to see a new international agreement in place by 2015, for commencement not later than 2020. The agreement between Australia and the EU should be seen as a catalyst for the thinking behind what is to come.

Finally, as something of an aside, one of the major complaints by Australian companies has been that the current $23 fixed price and the future market floor price put the Australian price of carbon “out of line with the international price”. I challenged this notion in a recent post, but irrespective those who called for such alignment have pretty much got what they wanted, although obviously not in the very short term. There may be eventual irony in this, should the EU system go through something of a recovery in its fortunes. While every indicator today points to a continued depressed price through to Phase IV, stranger things have happened in commodity markets.

P.S. I still think that the simplest approach for Canada, which has been putting off economy wide carbon pricing legislation for years, would be to join the EU ETS.