The Climate Group has posted an interesting story on its website and has been tweeting a key graph from the piece of work (below) with the attached text saying “From 2000 to 2012, wind and solar energy increased respectively 16-fold and 49-fold”. 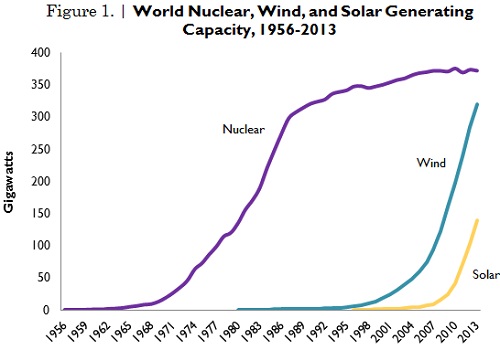 The story is headed “Wind and Solar Power is Catching up with Nuclear” and argues correctly that the global installed capacity of these two new sources of electricity are catching up with nuclear. Although the article concludes with the sobering reality that actual generation from wind and solar are still just a fraction of that from nuclear, the headline and certainly the tweets are somewhat misleading.

Both wind and solar have very low on-stream factors, something like 30% and 20% respectively in the USA, whereas nuclear is close to 90%. This means that although 1 GW of solar can deliver up to 1 GW of output, this is highly intermittent, needs considerable backup and results in an average output of only 200 MW (with a low of zero half the time). By contrast a 1 GW nuclear power station is on stream most of the time and delivers about 1 GW 24/7 throughout the year. Therefore, comparing solar or wind capacity with nuclear capacity gives little insight into the actual energy being generated, which is really the point of any comparison in the first instance. The global generating picture actually looks like this (Source: BP Statistical Review of World Energy 2014); 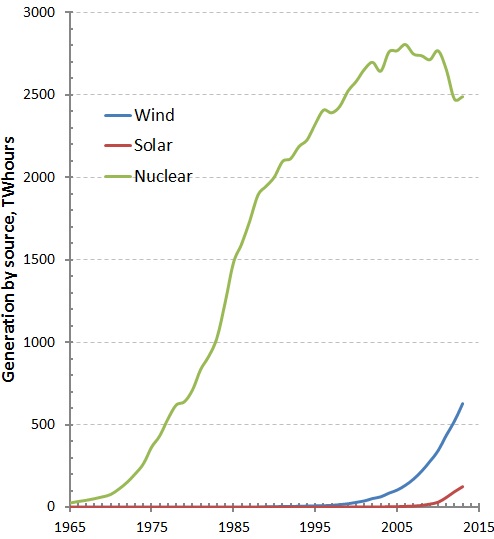 Wind, but particularly solar generation are still only a fraction of nuclear generation, even with the global nuclear turndown following Fukushima. Interestingly, both wind and solar are only rising at about the same rate that nuclear did in the 1960s and 1970s, so we might expect another 30+ years before they reach the level that nuclear is at today, at least in terms of actual generation.

The comparison of capacity rather than generation has become a staple of the renewable energy industry. Both coal and nuclear provide base load electricity and have very high on-stream factors. Depending on the national circumstances, natural gas may be base load and therefore also have a high on-stream factor, but in the USA it has been closer to 50% as it is quite often used intermittently to match the variability of renewables and the peaks in demand from customers (e.g. early evenings when people come home from work and cook dinner). This is because of the ease with which natural gas generation can be dispatched into or removed from the grid. However, natural gas is also becoming baseload in some parts of the USA given the price of gas and the closure of older coal plants.

Capacity comparisons look great in that they can make it appear that vast amounts of renewable energy is entering the energy mix when in fact that is not the case, at least not to the extent implied. Renewable energy will undoubtedly have its day, but like nuclear and even fossil fuels before it, a generation or two will likely have to pass before we can note its significant impact and possibly even its eventual dominance in the power sector.