August 3rd saw the Obama Administration release its long awaited Clean Power Plan. The plan partly underpins the current US COP21 INDC (Intended Nationally Determined Contribution) to reduce emissions by 26-28% by 2025 compared to 2005. It also indicates that by 2030 the power sector emissions in the USA will be 32% lower than 2005 levels, which presumably is the beginning of the next phase of their national contribution. However, this plan if for electricity only, consumption of which represents a bit less than a quarter of final energy use in the USA.

Much of the media attention was on the proposal for existing power plants, but the rule comes in two parts; one for existing sources and a second one for new sources. For existing facilities the emphasis is on the near term (i.e. through to 2030), with the rule focussed more on portfolio transition than radical adjustment. As has been seen in recent years, the US is already on a journey of portfolio change, with significant retirement of older coal fired power stations underway and much greater utilization of surplus natural gas power generation capacity. This has been largely driven by the development of shale gas, which came at an opportune time given the age of the coal fired fleet. Back in 2010 I posted the two charts below, which contrast the ageing coal fleet (median build year around 1970-1975) with the relatively new natural gas infrastructure (median build year around 2000). The whole process has quickly and efficiently reduced emissions across the United States – a phenomena also seen in the UK in the 1990s as North Sea natural gas overwhelmed the older coal based infrastructure. 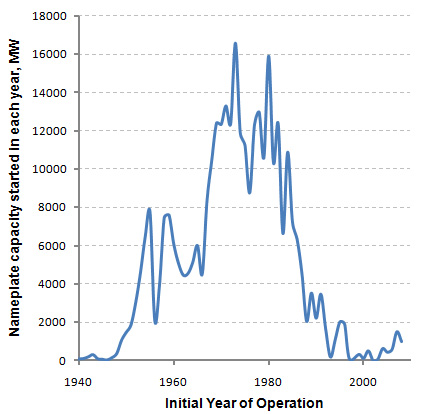 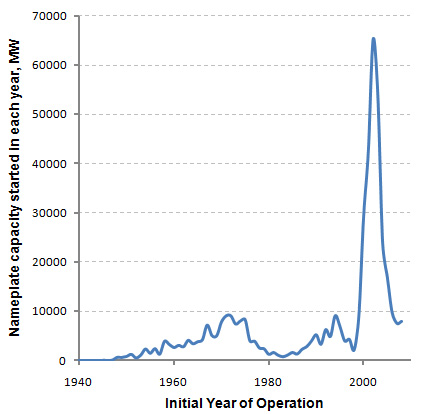 The US journey of substitution continues today, but augmented by considerable solar and wind capacity. The new rule for existing plants encourages that transition to continue, focussing on energy efficiency in coal fired power plants (Building Block 1), continued substitution of coal by natural gas (Building Block 2) and a further push on renewables (Building Block 3). But the rule puts significant near term emphasis on renewable energy development rather than further encouraging the further uptake of natural gas. In fact, through the use of a crediting mechanism (Emission Rate Credits) within the EPA rule, the efficient displacement of coal by natural gas is curtailed, possibly even leading to a similar outcome as experienced over recent years in the EU, a higher overall energy cost and some coal growth. This happened in the EU because of near term renewable energy policies bringing more distant and costly projects forward, which in turn supressed the carbon price and the otherwise successful switching away from coal to natural gas that the carbon price was driving at the time.

In any plan to manage power sector emissions, carbon capture and storage (CCS) is almost certainly a long term requirement, so it should be encouraged from the outset. In the case of the existing source rule, there is no particular steer towards CCS. Although CCS is mentioned about sixty times in the 1,500 page document, there is a significant caveat; cost. While the rule makes several references to the cost of CCS, this is much more in the context of retrofit of facilities that have limited remaining shelf life. Although CCS is critically important over the longer term, it doesn’t make much economic sense to retrofit old facilities with the technology and as can be seen above, the new build coal fleet is relatively small.

But CCS does come into the picture when looking at the construction of new coal fired power plants. These will operate for up to fifty years, well into the period when the USA may want to reduce national emissions to very low levels, yet still make use of the vast fossil fuel resources that is has at its disposal. The EPA rule finds that the best system for emission reduction (BSER) for new steam units is highly efficient supercritical pulverized coal (SCPC) technology with partial carbon capture and storage (CCS). In such cases, the final standard is an emission limit of 1,400 lb CO2/MWh‐gross, which is the performance achievable by an SCPC unit capturing about 20 percent of its carbon pollution. This offers some opportunity for CCS to develop in the near term, depending of course on the rate at which older coal fired power stations are displaced and new ones are proposed. That in turn may be hampered by the Emission Rate Credit mechanism. A flaw in the thinking on ERCs (and also for much of the push towards renewable energy as a means of dealing with atmospheric CO2) is the assumption that a tonne of CO2 not emitted now by generating electricity from renewable energy or improving efficiency equates to a lower eventual concentration of CO2 in the atmosphere.  This may not be the case, a point I discuss at some length in my e-book, Putting the Genie Back. Given that both geographical (used elsewhere) and temporal (used later) displacement of fossil fuel is a reality, the actual offset of CO2 by using renewable energy is dependent on the future energy scenario. By contrast, a tonne of CO2 stored is over and done with. Renewable energy should certainly be encouraged, but not at the cost of pushing CCS out of the picture.

The USA is now heading towards an electricity mix that consists of efficient natural gas generation, some legacy coal, renewables, some nuclear and possibly coal with CCS. It has taken a long time to get to this position and doubtless there will be challenges ahead, but the direction appears to be set. However, I will always argue that a well implemented emissions trading system could have achieved all this more efficiently, at lower cost and therefore with less pain, but at least for now that is not to be (or is it – there are a legion of trading provisions within the rule).