Back in September 1971, an article appeared in Scientific American on energy use. It remains very current today. Earl Cook was attempting to look at the limits to energy use and how that energy might be provided in a modern society. The article starts with the chart below that shows potential demand from various stages of human development.

Today, we see human society spread right across the chart with substantial parts of the world in one of the versions of Agricultural Man, whilst many of us are in Technological Man. Global energy use stands at some 600 EJ, or about 80 GJ per person per annum whereas in 1971 the number was around 60 GJ. There are significant regional, national and even sub-national differences, with the USA at around 300 GJ and India at 30 GJ as two examples. It is also important to recognise that the Earl Cook chart applies more to the individual archetypes, rather than to national averages. At any point in time, the national average may include people in several categories and the individual demand may not be fully reflected in the national average if imports exceed exports in quantity or carbon intensity or both.

Cook pondered about where this energy might come from and what the limits of supply might be. Although resource constraint was a popular topic at the time (and another article in the same edition of the journal was by peak oil enthusiast M. King Hubbert), Cook concluded that environmental constraints may be more limiting than the resource itself. Although his focus was on more local environmental issues, his overall thinking was close to the mark as society now faces real constraints on emissions of carbon dioxide.

Yet we are far from done in terms of progression from Primitive Man to Technological Man.

Further on, Connected Man, which perhaps didn’t feature in Cook’s 1971 thinking, offers a very different outlook. Such a concept poses a real challenge – will Connected Man use even more energy than Technological Man with the introduction of a new Information category in the bar chart and further expansion within the other categories? Or perhaps Connected Man can break the trend above and bring such efficiency to the other categories that overall energy use per person falls, even as development progresses? That would be unprecedented (N.B. The Connected Man energy numbers are notional and for illustration purposes only). 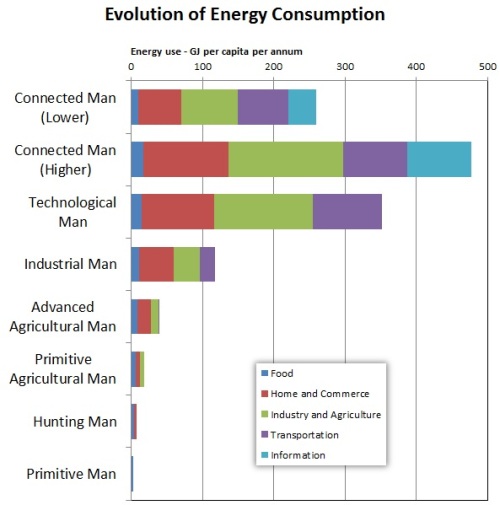 Connected Man is starting to appear today, with the prospect of 20 billion connected devices comprising the Internet of Things as early as 2020. A trillion connected devices by 2050 would be a reasonable extrapolation from that; it represents less than 15% growth in such devices per annum. It may be much more than this, but the energy demanded by these is unlikely to be trivial, even as efficiency improves.

The real question is what such connectivity offers to the energy system as a whole? Can it also lower the energy use of Industrial Man as well as offering the prospect of leapfrog to a much lower energy demand end state than might have been anticipated for Technological Man? That might have a profound impact on expected global demand later in the century even as we collectively progress to Connected Man. Nevertheless, while 21st century efficiency will very likely temper eventual energy use per capita, particularly against Cook’s 1970s estimates, the premise of rising energy demand at a global level still stands. 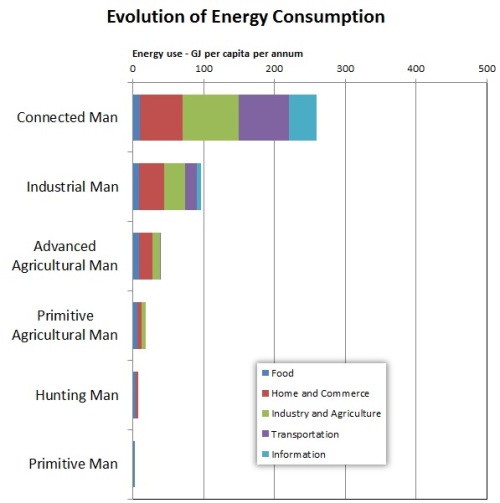