Within the Paris Agreement sits Article 6, a carefully crafted set of provisions to foster, in the parlance of the UNFCCC and the Parties to the Agreement, cooperative approaches. This includes a provision for cross border transfer of mitigation outcomes and a mechanism to contribute to the mitigation of greenhouse gas emissions and support sustainable development. But for those outside the negotiating process (and hopefully those inside as well), this Article is seen as the foundation for carbon market development. There was a great deal of advocacy effort behind the Article, particularly from the International Emissions Trading Association (IETA) who argued strongly that such a construction within the Paris Agreement was essential to see accelerated adoption of government implemented carbon pricing; widely recognised as a critical policy instrument for managing carbon dioxide emissions.

The wording of Article 6 needs some deciphering and for those now assembling in Bonn to begin the process of implementation of the Paris Agreement, some steer from the private sector will hopefully be helpful. After all, if the provisions do enable the development and expansion of carbon markets then it will almost certainly be the private sector that is most deeply involved. To that end, IETA have now published a first thought piece on Article 6, setting out a vision for its implementation. 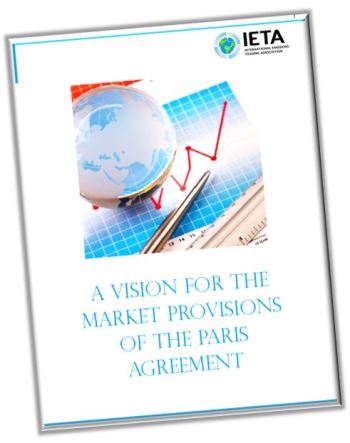 The IETA vision for Article 6 is built on the need for governments to implement carbon pricing, ideally through market based approaches such as cap-and-trade or baseline-and-credit. This starts with the internationally transferred mitigation outcomes (ITMO), described in 6.2 and 6.3. These transfers are effectively carbon market trades between governments or private entities operating through emission trading systems. One example is the link between California and Quebec, which effectively ties parts of the Nationally Determined Contributions (NDCs) of Canada and the United States together. Similarly the link between Norway and the EU ETS is doing the same for their respective NDCs. IETA argues that for clean and simple accounting and the avoidance of double counting, that the concept of exchange of carbon units, either notional or real, should be an underpinning feature of any ITMO. That means the basis for cooperative approaches is, for the most part, a market based one. For governments to access the economic benefits and cost effectiveness of a cooperative approach, they will need to implement carbon unit based emissions management systems within their economies.

IETA also recognises that not all governments may be ready or able to implement trading based systems, so its vision draws on another aspect of Article 6 to enable this. Paragraphs 6.4 (a) – (d) describe an emissions mitigation mechanism (which IETA have given the designation EMM). While some commentators are already arguing that this is a future version of the Clean Development Mechanism of the Kyoto Protocol (i.e. CDM 2.0), IETA makes the case for a much broader interpretation and use of this mechanism. Such implementation could see the EMM offering both universal carbon allowance and crediting units for those countries that choose to use them, facilitating trade between NDCs (i.e. ITMO), providing registry accounting and offering the prospect of carbon pricing in many economies.

The EMM could also be designed to establish sector baselines and issue sovereign credits for performance in excess of those baselines, which might then be purchased by external climate funds to channel investment. In this way it would function more like the CDM. But as IETA notes in its thought piece, the world in which crediting from one country acting as a direct offset in another is coming to an end. Under the CDM this was possible because the project host country had no quantified emissions management goal. As such, national accounting effectively took place on one side only, although the project itself had to have a credible baseline against which it operated. But as NDCs progressively expand to cover all national emissions (if they don’t then the Paris Agreement can’t claim to manage global emissions), paragraph 6.5 prevents such one sided accounting;

This means that the transfer of credits from a project across a national border (in the style of the CDM) will impact the national inventory reports of both parties. IETA argues that these transfers will then have to be executed in the style of Joint Implementation (JI) of the Kyoto Protocol, which effectively required an adjustment to the project host country’s national goal if the crediting unit was to be used by another Party to meet their goal.

The Paris Agreement introduces a very different world of international emissions trading to the one that exists today and has operated in recent years. The IETA paper concludes with a visualisation of how this might end up.