It was interesting to see the FT report recently that there may be a cobalt crunch looming, with hedge funds actually stockpiling physical cobalt. The FT reported that half a dozen funds have purchased and stored an estimated 6,000 tonnes of cobalt, worth as much as $280m. This is equivalent to 5 per cent of annual global production of the metal.

I talked about cobalt in a recent post and noted that the current Tesla S battery contains some 7 kgs of Cobalt; so the stockpile reported by the FT is sufficient for 860,000 cars. This is equivalent to ten times the Tesla 2016 requirement for the 80 thousand electric vehicles (EV) they manufactured. In 2016 total global sales of EVs neared 800,000, although not all of these would use cobalt to the extent that a Tesla S does.

Going forward, the EV outlook appears strong, with the IEA Global EV Outlook 2016 showing a “Paris Declaration” (Figure 3) EV stock build of some 40 million cars globally over the coming eight years. If each of these vehicles required 7 kgs of cobalt, then total additional demand for cobalt between now and 2025 would be 280,000 tonnes. This compares with global production of 123,000 tonnes per annum, i.e. it represents more than two years of global cobalt production. The website mining.com reported in October last year that the Democratic Republic of the Congo has a healthy pipeline of new cobalt projects and could see production rise by nearly 5% per annum in the coming years. If this continued through to 2025 then about half the shortfall would be covered.

Cobalt appears to be a critical component of the current generation of batteries. While there are many electro-chemistry formulations for rechargeable batteries, the use of cobalt in the cathode results in high energy density, important for vehicle range. But alternative chemistries offer other benefits, for example Lithium Iron Phosphate batteries have much better power output. Nevertheless, cobalt seems to feature in many of the battery chemistry formulations now being used for EVs.

Cobalt is primarily mined as a by-product of nickel and copper production, which is good news in that there will likely be significant additional demand for these metals as EV production ramps up. The same Tesla S battery discussed above has about 35 kg of nickel and the electric motor itself will have copper in the coil windings. Nearly half of global copper production is for electric motors, although alternatives may appear in the form of exotic material, e.g. carbon nanotubes.

Finally, there is a human rights issue associated with cobalt. About half the global production comes from the Democratic Republic of the Congo, where concerns have been raised regarding labour practices in the cobalt industry. Sky News reported on this recently but only mentioned the link with smart-phone batteries.

In recent months the cobalt price has doubled (Source: infomine.com), although it is clear that there is considerable long term volatility in this commodity, partly related to the fact that it is mined as a by-product of another process, so matching supply and demand can be problematic. 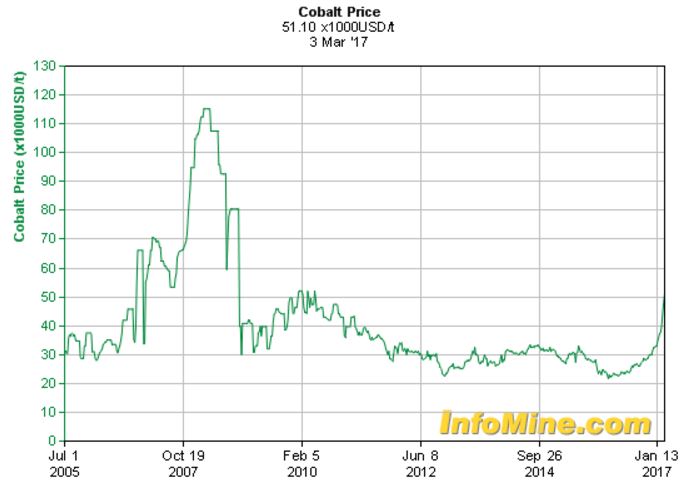