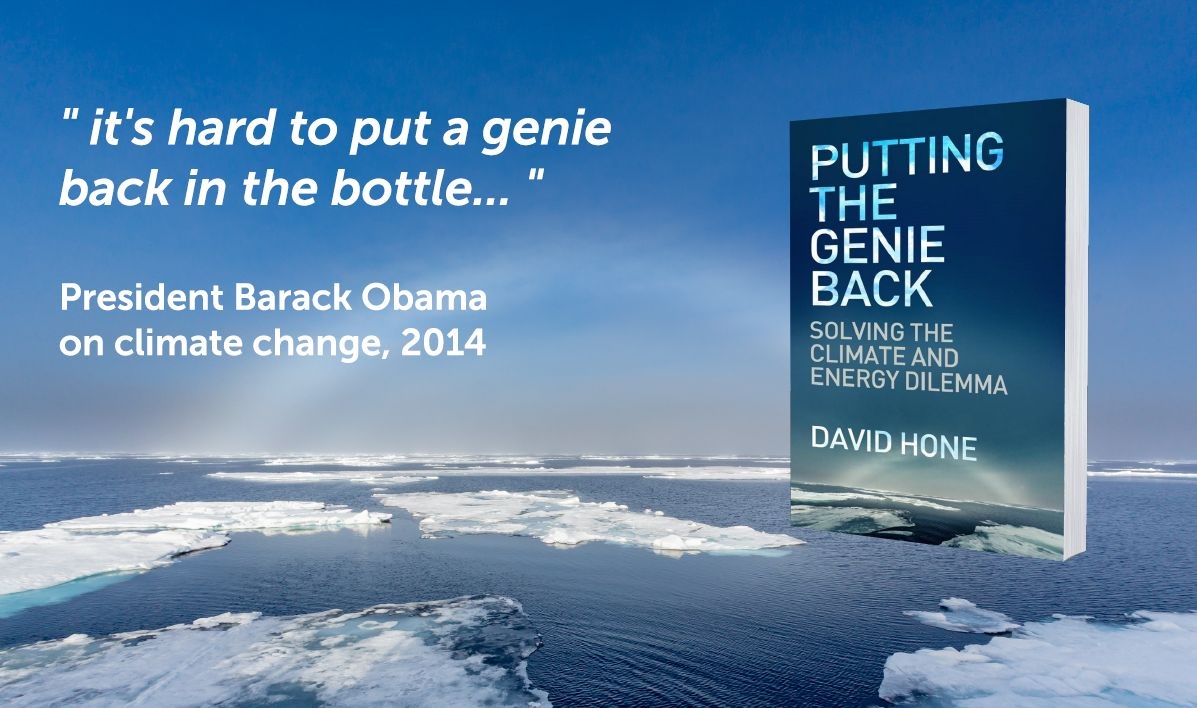 As I have posted in recent weeks, my complete book on climate change is now out, under the title ‘Putting the Genie Back: Solving the Climate and Energy Dilemma‘. The publisher, Emerald Publishing Limited, has just made the first chapter available on-line so that you can try before you buy.

Their advertising for the chapter included a quote from President Barack Obama, which gives a hint as to where the title came from, but isn’t the whole story. In May 2014 the President had invited several meteorologists to the White House for exclusive interviews on the climate change report that the administration released earlier in the week. The president summed up the importance of the situation with one simple phrase: “it’s hard to put a genie back in the bottle.” The quote was part of a longer piece which was referring to the climate itself and the possibility of reaching a tipping point. He had said;

“I want to make sure that my children and my grandchildren are able to enjoy a beautiful day like today; that they’re not living in a more dangerous world. […] This is one of those things that is very difficule to recover from. Once we hit a certain tipping point, we don’t know exactly how certain weather patterns could end up resulting in catastrophe. It’s hard to put a genie back in the bottle.”

By that time my first e-book, which the current book also incorporates, was in the late stages of writing and I had already pencilled in the genie metaphor, although with other suggestions coming from friends and family, I wasn’t entirely sure. My use was never in relation to the climate itself, but to the use of fossil fuels. That particular genie has ushered in astounding progress for society, but it is also a genie that is hard to challenge. Nevertheless, we can, with carbon capture and storage representing a method of returning the carbon to the subsurface, effectively putting the genie back.

Even though my intended meaning wasn’t the same as the President, when he also used the phrase in relation to climate change it seemed like the decision was made.

Enjoy the pre-read and I hope you buy the book. My proceeds are going to the Centre for Climate and Energy Solutions (C2ES) in Washington D.C.