Over recent weeks, a number of media outlets have noted the launch of a new commission in Germany, officially known as the “Commission on Growth, Structural Change and Employment”. The initiative is a welcome development and is born out of two concerns;

According to the Financial Times, the objective of the task force is to lay out a plan for the elimination of coal from the country’s energy mix and to report by the end of the year. In doing so, the task force must look at the employment and regional development issues associated with such a move, so as not to repeat the problems that manifested in other countries when coal use went into rapid decline. The FT concludes with the observation that chances are the outcome will be radical rather than minimal, with the commission perhaps even setting a date for the complete elimination of coal that is much earlier than many observers expect.

In the Shell Sky scenario released earlier this year where the goals of the Paris Agreement are met, coal use in the EU roughly halves from current levels by 2035. Over the same period, natural gas use rises, peaks and begins to fall, while wind and solar grow several fold. This would certainly involve significant change for Germany and the coal sector in particular, hence the need for the Commission to look at employment and structural impacts for such a shift.

But should the Commission also develop a plan for the elimination of coal itself, or should it focus on the societal impacts of such a change?

German power generation is covered by the EU Emissions Trading System (EU ETS) and has been since 2005. That system embodies an emissions trajectory that is now declining at 2.2 percentage points per annum (against a 2005 baseline), which implies an overall reduction of EU ETS emissions by 43% in 2030 relative to 2005. Extending that rate of change out further, the system will have no further issuance of allowances from 2056, or in other words emissions must be zero by then (or at least net-zero if the system allows for storage units via carbon capture and storage (CCS)). That system alone ought to be sufficient to guide the transition in terms of the energy mix.

But the EU ETS has been the subject of much criticism, in large part because of the low prices seen from 2008 through to 2017 (~€5 for much of that time). This isn’t to say that the EU ETS wasn’t working in that allowance allocation and surrender against emissions proceeded without a hitch. That is still the case today. The problem was a growing surplus of allowances and a market view that such a surplus would persist, leading to very low prices. That surplus initially grew for a number of reasons (i.e. the 2008+ recession, inflow of units from the Clean Development Mechanism of the Kyoto Protocol) but persisted for another reason; overlapping policies. These are actions taken by government which force emissions down at a rate faster than the EU ETS, thus throwing up allowances and adding to the surplus. Perhaps the most prominent of these policies was the EU wide push for renewable energy, which includes the German Energiewende. 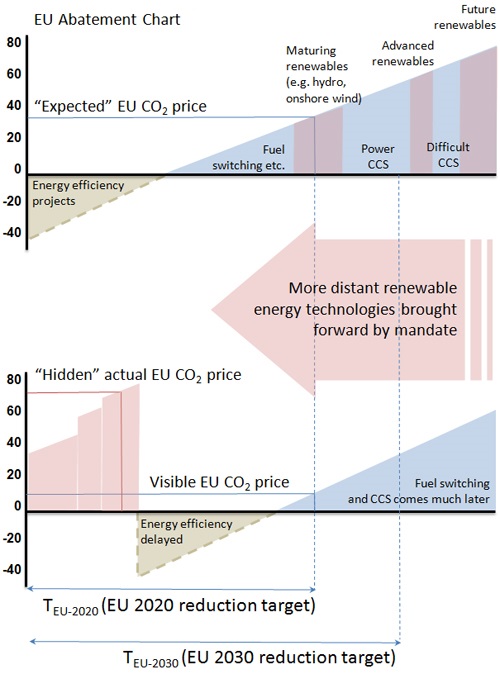 Policies that overlap a cap-and-trade system will tend to do two things;

These effects are illustrated in the charts above and this is exactly the impact that the Energiewende and other similar policies had on the EU ETS. This was eventually recognised and a correcting mechanism has now been built into the ETS, the Market Stability Reserve (MSR). The MSR removes and banks surplus allowances according to a formula built into its design.

With the MSR now starting to impact market perception, allowance prices are on the rise from a low of just €3 in 2015. Recently IETA noted in a tweet;

The EU ETS always was and remains the single most effective tool to push coal out of the power generation mix. For a period that will favour natural gas, but over time renewable energy, nuclear and possibly coal or gas with CCS will grow to dominate power generation. Coal would depart first. That is exactly what has happened in the UK, with that country bolstering the weak EU ETS with a floor price of £18 per tonne of CO2 (~€21). But it didn’t happen in Germany because of interventions on two fronts; the Energiewende favouring renewable energy and the national nuclear policy phasing out that technology.

Moving forward, the EU ETS is fully capable of shifting the EU power system (and industry) to an effective state of zero emissions in the 2050s. That date could even be brought forward by implementing more aggressive linear reduction rates from 2030 onward. A shift to 3% per annum from 2031 onward would deliver a zero emissions outcome by 2050. Notably, the system would deliver that outcome at lowest cost to society, an inherent design feature of the mechanism.

As the EU ETS bites, decisions will have to be made about the closure of individual generating stations and this is where the Commission could add value, ensuring that the transition is just and fair for various parts of the country. But if the Commission also proposes state intervention to force coal down an even faster exit route for Germany alone, there may be downwards pressure on allowance prices and the effectiveness of the EU ETS could be undermined, not just in Germany but right across the EU. While some of the surplus allowances will be absorbed by the MSR, others will flow out of Germany and underpin the longevity of coal in other EU member states. This means that the environmental benefits of early coal closure could be undermined as well.

But should the Commission land on a recommendation for accelerated phase out of coal, it could then advise on the use of newly introduced measures to cancel ETS allowances where governments take actions in addition to the EU ETS. This means that allowances can be cancelled in the case of deliberate coal phase out.

In the event of closure of electricity generation capacity in their territory due to additional national measures, Member States may cancel allowances from the total quantity of allowances to be auctioned by them referred to in Article 10(2) up to an amount corresponding to the average verified emissions of the installation concerned over a period of five years preceding the closure. The Member State concerned shall inform the Commission of such intended cancellation in accordance with the delegated acts adopted pursuant to Article 10(4).

While the cancellation of allowances represents a further intervention in the ETS, it would at least address the issue of environmental leakage to other Member States. But the simple alternative is to leave the EU ETS to perform its job and phase coal out as part of a lowest cost driven transition. This might be the most prudent approach. The EU ETS is a robust, well designed system that will deliver on the required emission reduction goals.