Over the past fortnight I have been fortunate to present the Sky Scenario to a number of different audiences in Doha, Delhi, Singapore and Canberra. Irrespective of the audience and location, questions always emerged around rates of transition in Sky and more often than not the question referred to the emergence of a hydrogen economy. In all cases, there was surprise that the emergence in the scenario is not as fast as expected.

Hydrogen is an important energy carrier in Sky and its presence solves many issues associated with hard to abate sectors. This includes aviation, heavy industry and road freight. For example and as noted in a recent post, hydrogen can be used instead of coal for reducing ores to metals in the metallurgical industry. But within Sky, these solutions take some decades to emerge and don’t really grow to meaningful scale until well into the second half of the century. 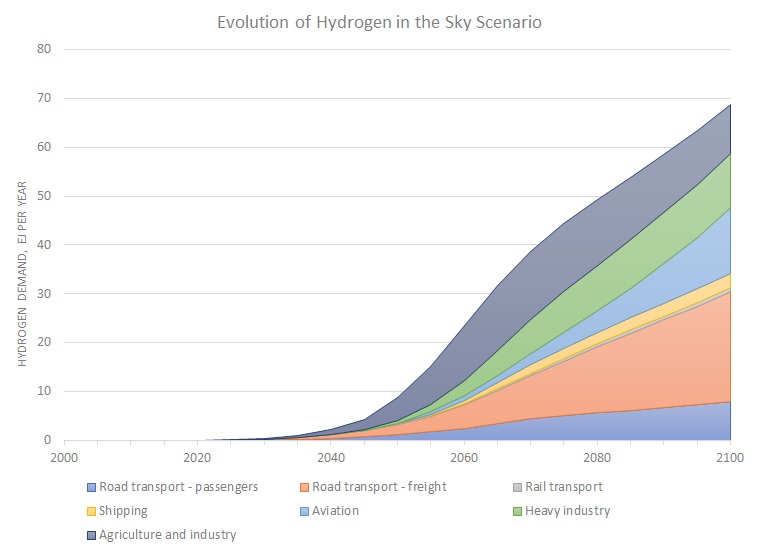 This then raises the question of the rate of deployment of a new energy technology. Historically, new energy technologies can take 30 years to move from first application to meaningful deployment, which in turn may be as little as one percent of the system. It is only when such a level is reached that the true future potential of the technology starts to become apparent. The analysis behind this finding was conducted by members of the Shell Scenario team back in 2008-2009 and subsequently published in Nature magazine (No Quick Switch to Low-Carbon Energy – Nature 462 – 3 Dec 2009 – Kramer and Haigh).

As an example, solar PV (photovoltaic cells) started its long journey back in the late 1970s and is only now building towards 1% of global energy demand, although within the electricity sector its contribution is approaching 4%. That is a 30+ year journey to scale. Wind has followed a similar path. Electric vehicles have had many false starts, including a large scale false start around the turn of the last century which was soon eclipsed by the Ford Model T. The pathway for nuclear was exceptional; it emerged from projects in the Second World War and developed quite rapidly from the early 1960s, but has remained largely static during this century at 5% of the global energy mix. The time from the first nuclear reactor in 1942 to 1% of global electricity generation was only 20 years.

But why so long? Take for example the potential application of hydrogen in iron ore smelting instead of the traditional use of coal. The chemistry of the process is well understood, but not a single demonstration of the process exists. However, a consortium of northern European companies have announced the planned construction of a pilot plant, with a view to have an operational process by 2035. Should this be successful, the first commercial scale plant may then be considered, which in turn will take some time for design, funding, decision and then construction. Future deployment by other companies may rest on a ‘wait-and-see’ decision following the start-up of such a first facility.

While the number of large blast furnaces in the world is in the dozens, it would still take many years to replace them all. In Sky, the heavy industry sector that utilises hydrogen begins to emerge after 2045, which aligns with the above consideration of suitable process designs being ready by the late 2030s and construction proceeding from that point in time. Between 2055 and 2080 the sector grows by a factor of six, which represents a rapid transition to the new technology.

The same may be true of a sector such as aviation, but possibly with an even later start. Aviation is completely dependent on energy dense hydrocarbon fuels, although there is some discussion of electric planes for very short haul routes. Hydrogen might emerge as a fuel for long-haul aviation and in Sky, we imagined that this would be the case. There has been some research over the years, but apparently very little at the moment. A Google search in the UK throws up a 2010 BBC report that notes hydrogen propulsion had been shelved completely by plane makers in favour of biofuels and continued efficiency improvements, although the same search also reveals a company in Singapore attempting development of a small test plane. While synthetic hydrocarbon fuels of some description may win the day in aviation, there is always the possibility of another contender emerging, but probably not yet. In Sky a first intercontinental hydrogen prototype flies in the 2040s, but scaled investment and use of hydrogen in aviation doesn’t commence in earnest until the 2050s. This is perhaps the earliest such deployment could be envisaged given the current state of development.

The thinking around transition timing discussed above is built into the Sky scenario, but it has also been pushed where possible to obtain the fastest possible transition. Big systems take time to change and major investments in emerging energy technologies come with caution and a lower appetite for risk. One aspect favouring this transition is the potential fragmentation of the energy system into smaller systems, including microgrids, local processing of waste and biomass (where local collection favours a smaller scale business model) and perhaps even technologies such as small modular nuclear reactors. Each of these can be built with smaller individual investments, negating the more cautious big investment approach.

Note: Scenarios are not intended to be predictions of likely future events or outcomes and investors should not rely on them when making an investment decision with regard to Royal Dutch Shell plc securities. Please read the full cautionary note in www.shell.com/skyscenario.