The World Business Council for Sustainable Development (WBCSD) held its annual company delegate conference in Switzerland this week. For the WBCSD Energy and Climate team the event marked the launch of the latest WBCSD publication “The Energy Mix”. This is a document that started life back in the middle of last year, originally as a response to the reaction from a number of governments to the events in Fukushima. The initial aim was to inform policy makers on the implication of sudden changes in energy policy, such as the decision by the German government to rapidly phase out the use of nuclear power. But as the work got going, the document took on a number of additional dimensions. Many have been covered in previous postings on this blog, but the document does a nice job of bringing a lot of information together in a crisp fold-out brochure format (at the moment the PDF is in regular page format, so the fold-out aspect is rather lost through this medium). 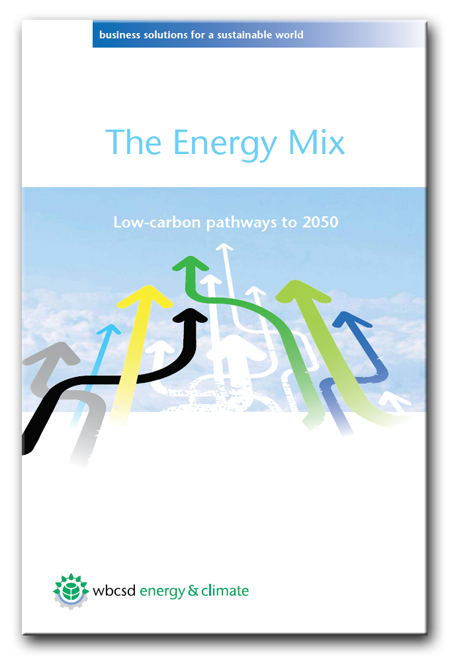 Sitting behind this effort is the WBCSD Vision 2050 work which charts the necessary pathway to a world in 2050 which sees “Nine billion people living well within the means of one planet”. A number of key themes are explored in “The Energy Mix” brochure:

The document uses some fifteen vignettes to illustrate a variety of points. For example, to illustrate a) that policy can make a difference and b) it takes a long time, but c) its still very hard to reduce emissions by a big amount, take the case of France. Back in the 1970s the government intervened in the energy system and have progressively forced the construction of substantial nuclear capacity and a national high speed rail network, operating in combination with (like the rest of the EU) high transport fuel taxes. While these measures were not originally intended to reduce CO2 emissions, they are nevertheless compatible with such a goal and could just as easily be the route forward for a country. France now gets about 80% of its electricity from nuclear and has one of the best rail systems in the world, yet emissions have only fallen by 28% in 40 years. Economic growth and population growth continue to eat into the gains made, which might argue for yet further measures in the longer term. However, French emissions on a CO2/GDP basis are about 60% less than in the USA. With a very low CO2 per kWh for power generation, France would be in an excellent position to further decarbonize if electric cars entered the vehicle population in significant numbers. Interestingly, the car company with perhaps the worlds most progressive electric vehicle production programme also happens to be French. 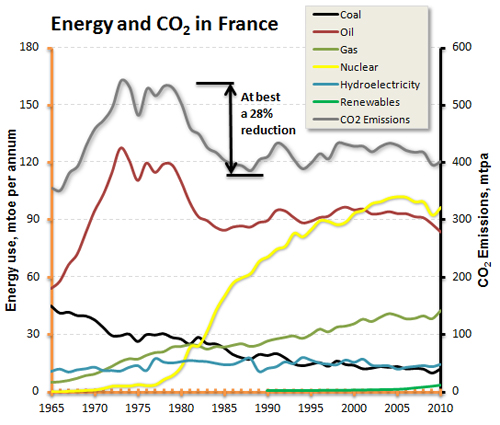 The key message on the required policy framework is a pretty simple one – cover the key sectors and focus on the elements of the technology development pathway (Discover, Develop, Demonstrate, Deploy). The resulting grid looks like this:

Filling in the boxes results in something that looks like this:

The framework shouldn’t be a big surprise, many of the elements are alive in the EU (but not so well in all cases- such as the carbon price).

The new WBCSD Energy Mix document can be downloaded here.