The ongoing debate in Europe about the current state of the Emissions Trading System (ETS) and the low carbon price outlook is gaining momentum and importantly gaining advocates for action. In response, Commissioner Hedegaard announced a much earlier than planned review of EU auctioning, which could potentially pave the way for a removal of allowances from the system.

There is no doubt that pressure for action is building, with a number of senior EU business figures making representation at a recent meeting of EU Environment Ministers in Denmark. Short statements were delivered by video, including one by the Shell CEO, Peter Voser. These can be viewed on the Danish Presidency website, with the Shell piece at the end (starts at 13:40).

But it isn’t just business in the EU getting into the debate. The academic community on both sides of the Atlantic are also weighing in. Rob Stavins, Albert Pratt Professor of Business and Government and Director of the Harvard Environmental Economics Program has offered some useful insights into the issues facing the ETS. He cuts to the heart of the issue, that being the proliferation of “complimentary” policies at both EU and member state level. Quoting from his blog:

But, in any event, the European Commission’s Energy division, Environment division, and Climate division should sort out the real effects of the “complimentary policies” that have contaminated the EU ETS, and which fail to bring about additional emissions reductions but drive up costs.  Whether any of this is feasible politically is a question that my European colleagues and friends can best address.

I have written quite a bit about complimentary measures in the past. For me, the clearest example of the issue is the impact of the UK Carbon Floor Price, shown in the illustration below. 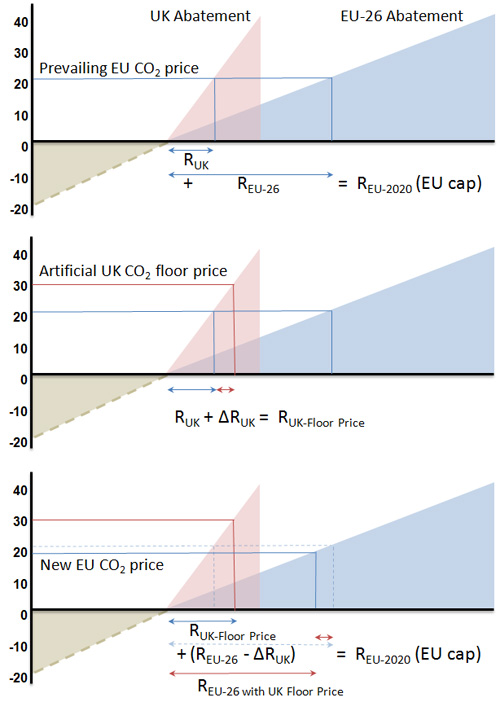 I won’t repeat the explanation for this, but you can find it here.

The complimentary policy issue is also addressed by Climate Strategies in their recent analysis of the ETS, which can be found here. They argue that;

. . . . the combined impacts of recession, response to the carbon price in 2008-11, and complementary measures, have led to a surplus of emission allowances that will last out to 2020. As a result, EU ETS allowance prices have collapsed. This undermines the EU ETS’s value as a driver of either emission reductions or investment. At a time of economic uncertainty and fiscal crisis, EU energy-related industries have lost orientation for investment, and governments have lost an expected €100bn of auction revenue.

A triad of measures are required to meet three distinct needs:

The three measures address different needs and are mutually reinforcing.

For those interested in what Peter Voser, CEO of Shell said, here is the transcript:

Over ten years ago Europe set itself the challenge of reducing emissions while maintaining economic growth. The EU ETS was developed to do this by establishing a carbon market, guiding investment along a path of lowest cost CO2 mitigation. A robust carbon price was envisaged to encourage rapid turnover of legacy infrastructure and therefore deliver new investment. By 2008, this journey was well underway. But today the ETS is in danger. There is a risk it will fail to deliver on its promise to drive new energy investment and reduce emissions.

There is a surplus of allowances and the CO2 price is currently too weak.  The drop in energy use as a result of the financial crisis is one factor. If this was the only cause, there might be an argument to let the system correct itself over time.

But, there is also a policy design cause, arising from the superimposition of multiple layers of policy, such as renewable targets, nuclear build rates, efficiency mandates and more. As the ETS has weakened, this process has accelerated.

The low carbon price, far from bringing relief to industry during a period of financial austerity, is a result of the high cost and uncompetitive energy pathway we are on. We should not forget that the ETS was designed to deliver the lowest cost route to CO2 targets in 2020 and beyond.

Against this backdrop, I would like to contribute to your deliberations with the following proposals:

A signal from Ministers assembled here today would be a significant step towards restoring confidence on the EU’s flagship climate policy.