The current spate of very hot weather across much of the USA (and not forgetting the balmy “winter” days in many states back in the early part of the year) raises the question of the role of climate change in relation to such extremes. Of course long term changes in the climate and the occurrence of daily and weekly weather events are very different things, with the latter being the direct result of chaotic movement within the atmosphere. But weather does follow some pattern and over the longer term these patterns can be influenced by a shift in the climate.

A few months back I commented on a paper written by James Hansen which examined this issue in some detail. As illustrated in the figure below, Hansen showed that the distribution of seasonal temperature has indeed shifted, leading to an increase in anomalous events. An important change is the emergence of a category of summertime extremely hot outliers, more than three standard deviations (σ) warmer than the 1951-1980 baseline.  This hot extreme, which covered much less than 1% of Earth’s surface in the base period, now typically covers about 10% of the land area.  He concluded that extreme heat waves, such as that in Texas and Oklahoma in 2011, Moscow in 2010 and now the US heat wave (which has seen thousands of temperature records topple), were “caused” by global warming, because their likelihood was negligible prior to the recent rapid global warming. 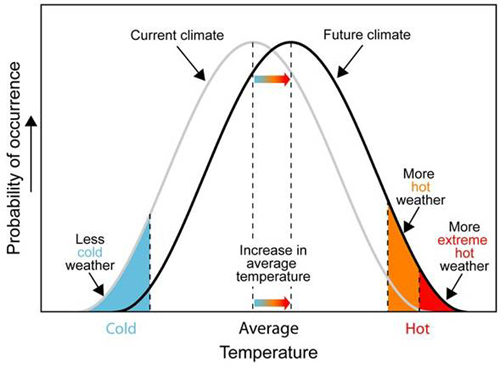 Hansen produced an analysis of temperature data which showed this phenomena was indeed happening. Given the current interest in the issue from friends and colleagues in the USA I thought I would try to see what I could establish by doing my own analysis. Long term US temperature data is readily available for download, so I loaded 110  years (1902-2011) of New York Central Park temperature data into Excel and did some number crunching. I looked at the summer period only (June, July and August) and focused on the maximum daytime temperature in °F. I divided the data into two parts, pre 1950 and post 1950. The respective distribution curves are shown in the chart below.

There is certainly a shift in the distribution curves, although it is quite small. The median temperature in the pre-1950 data is 82, whereas in the post 1950 data it is 83. But even such a small shift changes the probability of a very hot day. The chart below shows that while the probability of an 80°F day has barely shifted, the chance of a 95°F day has risen from 1.8% to 2.3%, or about a quarter.

Even such a small shift can have a noticeable impact. A chance of 1.8% means that before 1950 there were about 2 summer days with a maximum temperature of 95°F,  but since 1950 there has been an extra day every two years. Another way of looking at this is to examine the incidence of heat waves in New York. In the chart below, I have counted the number of days where that day and the previous three days were 90°F or above. Adding a trend line to the graph shows that over 110 years the number of “heat wave” days has increased from one to over three, or alternatively a single annual four day heat wave in 1900 to at least two per year by 2010 or one lasting more than a week (and there are other combinations as well). 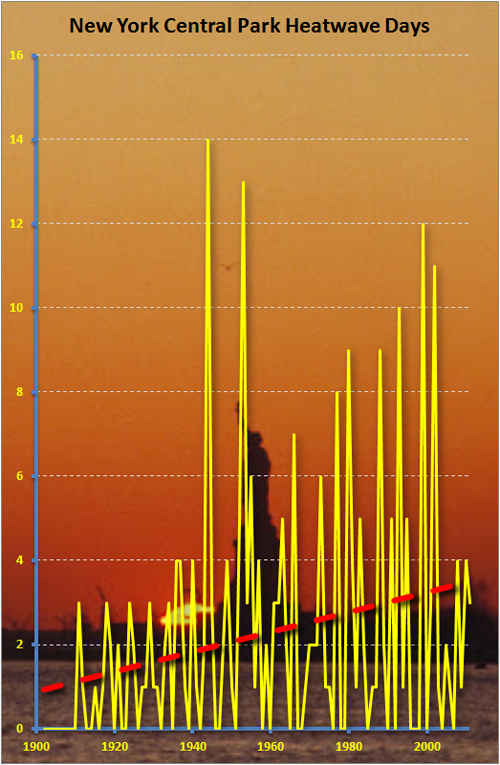 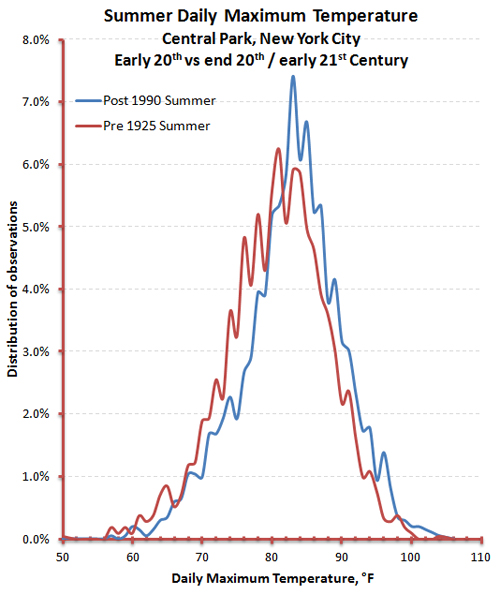