A year ago as the EU ETS price showed clear signs of a second step change downwards (in 2008/9 from €25 to €15 then in 2011 from €15 to €7), the EU Commission was resolute in its view that the mechanism was working, that it was responding to changes in the market and that all was well in the house of emissions trading. Rightly or wrongly, that view was backed by most of the major industry and business groups as well, to the extent that even if the Commission had thought that action was necessary it had absolutely no mandate for action.

But a year is a very long time in business and politics and this week, with the backing and support of many business groups, the EU Commission released its first concrete thinking on the state of the emissions market and began the political process necessary to attempt to address the problems.

The initial report (with the somewhat long title “Information provided on the functioning of the EU Emissions Trading System, the volumes of greenhouse gas emission allowances auctioned and freely allocated and the impact on the surplus of allowances in the period up to 2020”) spells out in pretty stark terms the scale of the allowance surplus that now weighs down the price. It also highlights the fact that it won’t be until well into the 2020s that this shows any real sign of going away through the natural development of the system and its declining cap. The report then lays out a course of action, with three proposed levels of severity examined.

That course of action involves skewing the allowance distribution in Phase III, such that less allowances are auctioned in the early years (2013 to 2016) and more are auctioned in the later years (2017-2020) – but the total number of allowances to be released remains unchanged, which means that there is no overall change in the surplus position that is forecast for 2020. The proposal is called “backloading”. The Commission has limited power in this area and even this step has required them to propose a very minor change in the Emissions Trading Directive to clarify the role that they have in the carbon market. 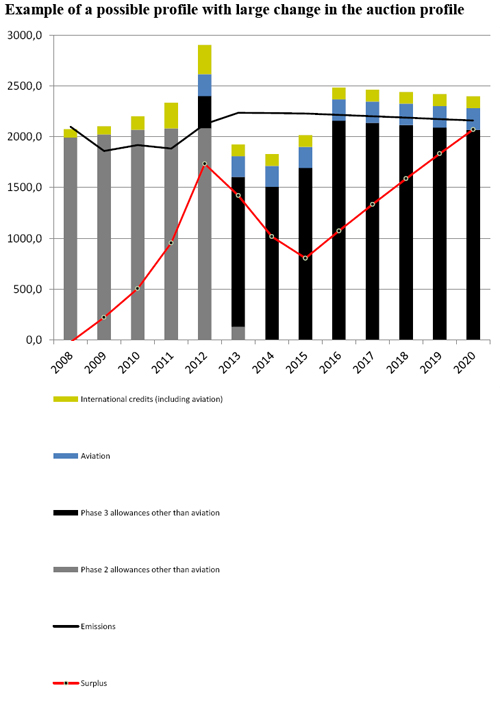 The largest backloading proposed is (quoting the Commission working paper):

“a reduction by 1.2 billion in the first three years of phase 3. This would result in a large reduction in the surplus in 2013. Nevertheless the reduction in the surplus remains significantly below the increase experienced in 2011 and expected over 2012. By 2015 the surplus would be below 1 billion unused allowances compared to a case where no changes in the auction time profile were implemented. After 2015 the auctioned amounts would actually increase significantly, resulting in an issuance of allowances well above future emission levels. This would drive a re-emergence of the surplus. Total annual issuance in the period 2016 to 2019 would be higher than in any year in phase 2 bar 2012. The decrease in auctioned volumes early in phase 3 would require drawing on the existing surpluses to make available the necessary allowances to the market to comply with emissions. This type of change of the auction time profile is thus likely to give strong temporary support to prices in 2013 to 2015, but would put downward pressure on prices in the second half of phase 3.”

At best, the move buys time and gives the Commission some breathing room to gain agreement on the necessary Phase IV parameters (rate of cap decline, possible use of auction reserve pricing, sectoral coverage, free allocation levels etc.), but doesn’t inflame the whole ETS target debate by proposing a full set aside and cancellation of allowances. This latter step is what is really needed, but may be politically too big a bite to chew on given the recent animosity over the Low Carbon Roadmap to 2030 and beyond. As such the Commission has opted for something that it thinks can be done today, rather than fighting the bigger fight over targets which it will have to do anyway in the context of Phase IV. Better leave it for that discussion!!

It is important to reflect on the role of the business community in all this. None of this would have happened were it not for a shift in position from opposition to market intervention to support. This isn’t to say that all business groups support such a move, but today many do. The catalyst for support was the gradual realisation that if the ETS failed to trigger a change in the (power sector) investment profile going forward, governments would inevitably make the decisions for business by applying mandates.

Some business groups remain opposed to intervention, but these now appear to be the ones that have always opposed action to reduce CO2 emissions. While they claim to support the ETS, they strongly argue the case that the market should be left to its own devices. The real agenda is often very different. With the high levels of free allocation that have existed during Phases I and II, the businesses involved are more than happy with the status quo which requires little more than administrative compliance (it certainly doesn’t require emissions reduction through projects and investment).

The battle isn’t over yet and much remains to be done, but this week saw an important step forward and one that hopefully leads to the restoration of the ETS as the primary driver for emission reduction investments across Europe.