There is no doubt that solar PV is deploying rapidly, with 50+ gigawatts of capacity now being added each year to the global energy system. A recent article in the Financial Times discusses the “Great Resource Shift” as it calls the visible energy transition and notes the following for solar in particular;

The amount of solar power installed over the past few years, for example, has exceeded experts’ optimistic predictions . . . . . “It’s a lesson in disruption, in that things can happen very quickly . . . . . And it’s quite difficult to build into most traditional forecasting. We’re now in a situation where the cleaner, alternative technologies are actually comparable or in some cases cheaper than the incumbent technologies so that’s a dramatic change from a few years ago.”

It is certainly the case that when returning to the IEA World Energy Outlook published in 2006, current solar deployment far exceeds their forecast. In that year, IEA expected 2015 solar to generate some 34 TWhrs of electricity, rising to 238 TWh by 2030. A look at the most recent version of the BP Statistical Review of World Energy shows solar in 2015 at 253 TWh against a global total of 24,100 TWh, i.e. 1%. While this remains low, it is nevertheless nearly an order of magnitude larger that the IEA number for 2015, even though IEA were close with their 2015 total electricity forecast (23,682 vs. 24,098 from BP). The difference in wind generation was only a factor of two, with IEA expecting 449 TWh and the BP 2015 actual coming in at 841 TWh.

But not all outlooks took the same view. Back in 2006 Shell was preparing data for the formulation of its previous round of energy scenarios, Blueprints and Scramble. These were released in 2008, but the data is from the same period as the 2006 IEA World Energy Outlook. The Blueprints scenario imagined very rapid deployment of solar, resulting in some 500 TWh in 2015, about double the BP number. Based on current growth rates in solar (~30% per annum but declining in relative terms as the base gats larger) the world may be at this level by 2018.

This rapid deployment has given rise to great optimism regarding the future of solar, yet a deeper look at Blueprints and more recently the solar based Shell scenario Oceans, shows a familiar pattern. In the early years of deployment the relative rate of change is often extraordinarily high, but as the energy source becomes material within the mix this slows, even as absolute deployment rates are maintained. Exponential growth doesn’t continue. Looking back at Blueprints and an article on energy system growth that was published in Nature and written by two members of the Shell Scenario team, we see a potential route forward for solar. The chart below was prepared for that Nature article, but overlaid is the observed growth in solar from 2007 to 2015. 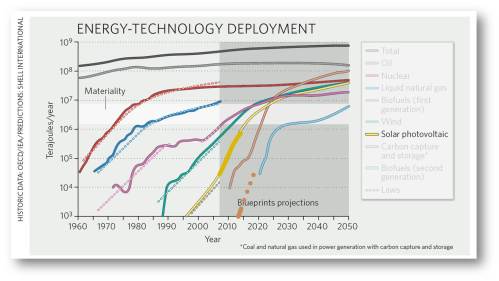 A key observation from the chart is that growth becomes more linear as the given energy source becomes a material part of the energy system. By 2050 in the Blueprints scenario solar is around 74 EJ, or nearly 10% of primary energy. By 2100 in the Oceans scenario this has risen to nearly 300 EJ, or about 30% of primary energy. 300 EJ is about 80,000 TWh, which means a 300 fold increase on current solar generation or the equivalent of solar producing over three times the current global electricity consumption. But this takes another 84 years to materialize.

One interesting observation looking back at IEA WEO 2006 is that global emissions of carbon dioxide were forecast at 31.6 billion tonnes in 2015, which is very close to the current data (BP at 33.5 Gt, IEA at 32.1 announced in March). As noted above, total 2015 electricity generation was about 400 TWh above the 2006 IEA projection, with IEA falling short on wind and solar by 611 TWh. One worrying conclusion from this is that while the rapid expansion of wind and solar has certainly added to global electricity production and likely helped many people gain access to electricity before they might have without it, the deployment hasn’t impacted CO2 emissions. This supports the argument that CO2 emissions will really only be impacted through the introduction of government led carbon pricing and not by simply trying to outcompete fossil fuel use with rapid deployment of something else. The latter strategy might result in an energy system that has significant solar and wind, but without significant curtailment of emissions.

Scenarios are part of an ongoing process used in Shell for more than 40 years to challenge executives’ perspectives on the future business environment. They are based on plausible assumptions and quantification and are designed to stretch management thinking and even to consider events that may only be remotely possible.