Looking back at my 2017 post on developments in 2016, it becomes clear that the past twelve months have been more consolidation than progress in terms of carbon market development. It also means that the coloured map (below) hasn’t really changed, apart from a slight set-back and the very positive addition of Singapore.

A big story that emerged in 2016 was the prospect of a nationwide emissions trading system in China. Observers waited throughout 2017 for the formal commencement or at least an announcement, but news didn’t come until mid-December of an imminent launch. Rather than an economy wide cap-and-trade system, the government announced that an emissions rate based system would commence in the electricity sector. Harvard’s Rob Stavins has written extensively about it in a recent blog post.

The Chinese carbon market will double the share of global CO2 emissions covered by worldwide carbon-pricing systems to almost 25 percent.

China wasn’t the only country in the news. Also within the Asian economy, Singapore announced the start of a carbon tax based system from 2019, with a draft Bill appearing for consultation during 2017. The tax will be applied on power stations and other large direct emitters which produce more than 25,000 tonnes of carbon dioxide equivalent of greenhouse gases a year. There are currently 30 to 40 of such large emitters, mainly from the petroleum refining, chemicals and semiconductor sectors. The proposed tax will be around S$10-$20 per tonne CO2.

In North America, progress was mixed. The focus continued to be on Canada with the September announcement that Ontario had entered into an agreement to formally link its carbon market with markets in Quebec and California effective January 1, 2018. The Agreement will allow the governments of Ontario, Quebec and California (the Parties) to hold joint auction of greenhouse gas emission allowances and to harmonize regulations and reporting requirements. An important addition to this was the passage of a Bill in California to extend that State’s cap-and-trade system through to 2030. But with the announcement that the US would be leaving the Paris Agreement and that the Administration would be rolling back the Obama Clean Power Plan, progress in the rest of the country was muted.

In Central Asia, the Kazakhstan emissions trading system remained suspended (hence the change from green to orange), but following an announcement by the government, this should revert to operational status in 2018.

Here in the EU, the ETS continued, but 2018 saw much needed reforms agreed. The main elements of the agreement are:

The EU ETS expanded slightly with the agreement of a link with the Swiss ETS, although it may be some time before this comes into practice. The ratification of the agreement will require the approval of the Council and Parliament, which is expected in early 2018. When parties are technically ready to connect the two systems, they will formally deposit their instruments of ratification. The agreement will enter into force at the start of the following year.

As the year concluded and nations met in Bonn for COP23, it was also clear that carbon pricing, both through taxation or a trading system was being widely considered. This offers considerable hope for the years to come. 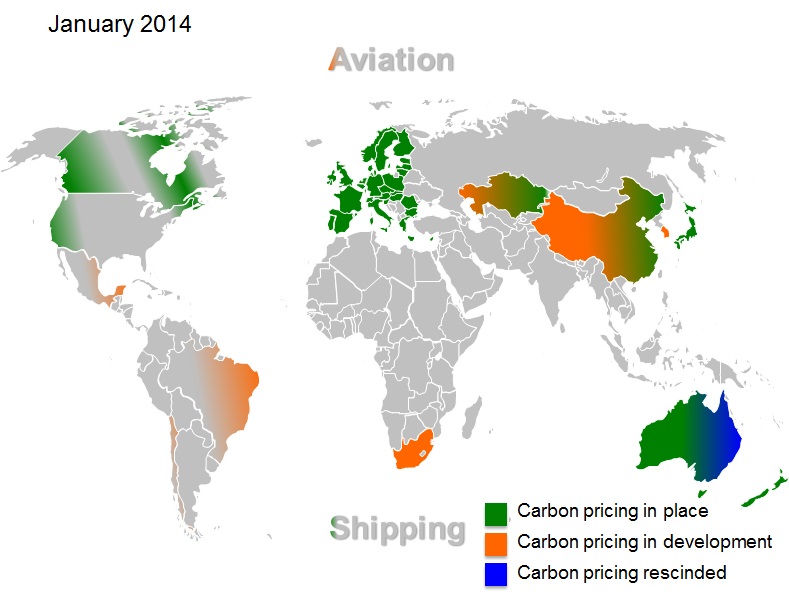