As the climate issue progresses and the seemingly endless noise linked with ‘crisis’ and ‘emergency’ risks desensitizing many to the reality of the issue, clear and unambiguous signals might jolt the consciousness of society to take the issue more seriously. There is a real possibility that one such climate signal is not as far away as we might think. This isn’t to argue that the rate of change is worse than thought, but that the progression of change is slowly but inexorably taking us into new territory.

I recently revisited this work, given that the Intergovernmental Panel on Climate Change [IPCC] are now using an 1850-1900 baseline for assessing the amount of warming we have seen since pre-industrial times. For this fresh analysis I turned to the Berkeley Earth data series as it offers a temperature record that stretches back to 1850. Berkeley use a 1951-1980 baseline (the average of the temperatures over that period is zero), but this can be easily reset to 1850-1900 as the data is available. The temperature record shows the now familiar trend, peaking at around 1.3°C in 2016, the year of the last very strong El Ni؜ño.

An El Ni؜ño history can be found on the NOAA (United States National Oceanic and Atmospheric Administration) website and is shown below, with very strong El Ni؜ño years occurring in 1966, 1973, 1983, 1998 and 2016. These are years with the Oceanic Ni؜ño Index at or above 2.0.

A plot of the average surface temperature anomaly for those years using the Berkeley Earth data reveals a straight line, with a high regression coefficient of 0.9947 and a slope of 0.0198. This aligns precisely with the IPCC Special Report on 1.5°C finding that warming is progressing at a rate of 0.2°C per decade (IPCC SR15 SPM A1.1 – Estimated anthropogenic global warming is currently increasing at 0.2°C (likely between 0.1°C and 0.3°C) per decade due to past and ongoing emissions (high confidence).)

This degree of warming shouldn’t come as a surprise, but the interesting finding is revealed by extrapolation of the trend line. Projecting forward with the same slope sees the line crossing 1.5°C in 2025-2026. This means that should we have a very strong El Ni؜ño in 2025 or soon after, the year in which it occurs will most likely be the first year in which surface warming equals or exceeds 1.5°C. Very strong El Ni؜ño years are infrequent, with the one prior to 2016 being in 1998, so it may be some years after 2025 before a 1.5°C year is actually experienced.

This is not the same as reaching 1.5°C as described in the Paris Agreement, given that once the El Ni؜ño has ended the temperature will almost certainly dip below this threshold for several years. But a 1.5°C year won’t go unnoticed and may well put even greater pressure on emitters to make changes. Perhaps it will even be the signal that jolts the wider societal consciousness.

Looking at a 10-year moving average for the same data over a similar period (i.e. temperature data from 1971) shows a similar trend, although the slope of the line represents warming closer to 0.18°C per decade rather than 0.2°C. In this case the 1.5°C threshold is passed in 2042 and that would put the world firmly above the goal of the Paris Agreement unless an overshoot scenario is in play (i.e. with large scale carbon dioxide removal later in the century the 2100 temperature increase has fallen back below 1.5°C). 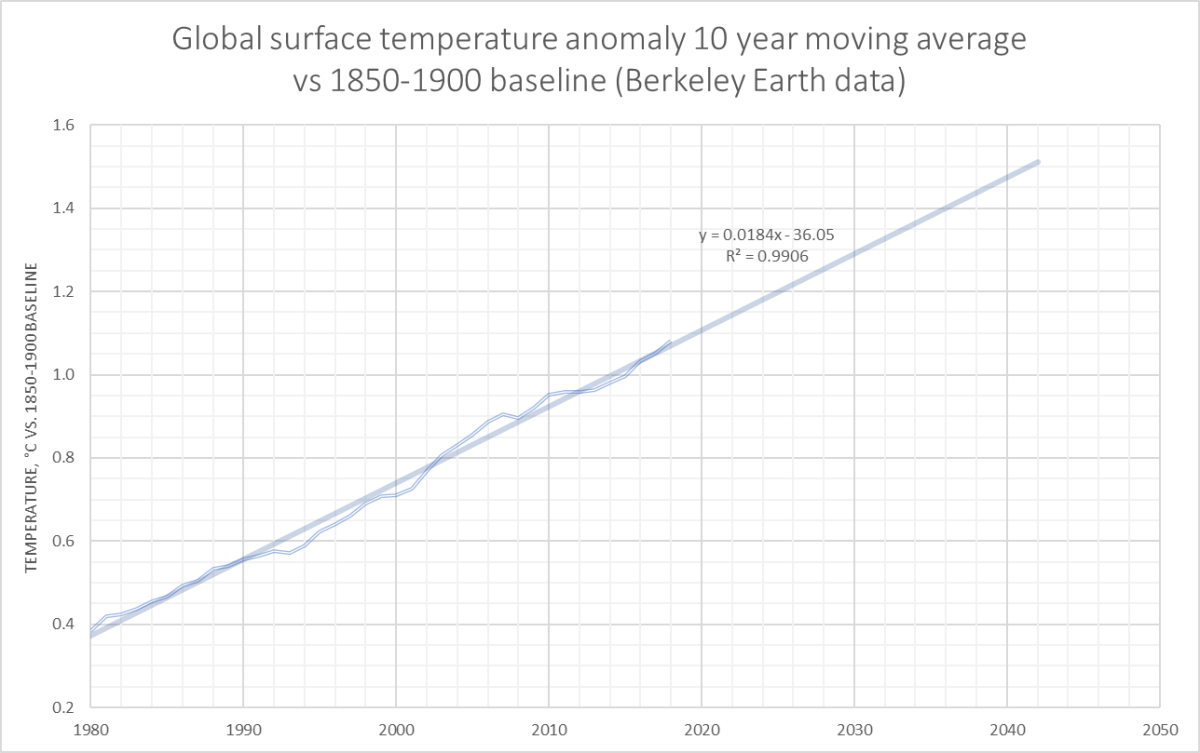 From 2050 on we might be seeing the first year exceeding 2°C should there be a very strong El Ni؜ño around that time. These early signals of things to come could be very important drivers for the way society responds to climate change. They don’t mean that change is progressing faster than anticipated, only that it is happening and is very real.